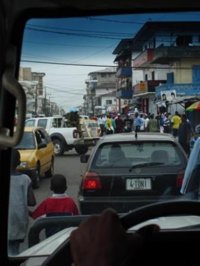 America’s political glitterati descends on Liberia this Monday, January 19, for the inauguration of Africa’s first female president, Ellen Johnson-Sirleaf. Laura Bush will be there, Condi too. We hear even Oprah will be making the scene for a few photo-ops.

But if the media were to wander outside the small quadrant of the city that’s being polished up for the festivities, what would they see? Successful democratic elections are only the first step to recovery. Ravaged by two civil wars and a series of pernicious leaders (including the exiled Charles Taylor) Liberia hasn’t had running water or electricity for 20 years now. 80% of the population is unemployed, and there’s only one hospital in the entire country.

What brought Liberia here and what’s to be done? Beyond this eye-flutter of attention from the American media, we’re digging in. Will Johnson-Sirleaf’s Harvard and UN creds be enough, especially with former warlords in the newly elected parliament? Can Liberia be a model for other post-conflict African nations? And once the celebrities leave, what role should America, whose largest footprint in the country is a Firestone rubber plantation, play in the rehabilitation?

Special Representative of the Secretary-General, Coordinator of United Nations operations in Liberia, 2003-2005.

Author, A Life Removed: Hunting for Refuge in the Modern World

Emira Woods,“African Americans and the Ongoing Crisis in Liberia”

Rose George, “A book launch in a country with no bookstores, and a population that’s 80% illiterate: Liberia 2005.”

From Liberia: “…a noticeable shift toward peace.”

The election educational spots that we aired on this show were produced by ,Talking Drum Studios, a part of the global organization Search For Common Ground.

Search for Common Ground (SFCG) combines media work with on the ground community outreach in 16 countries around the world, helping individuals, groups and communities transform the way they deal with conflict: away from adversarial approaches, toward cooperative solutions. In Côte d’Ivoire, Guinea, Liberia and Sierra Leone, SFCG established Talking Drum Studios (TDS), multi-media studios with multi-ethnic teams of journalists and producers, to stimulate national dialogue around critical issues. SFCG’s TDS produce a wide range of radio and audio programming, along with print articles and videos, in a “Common Ground” approach that factors in all the key stakeholders in the conflicts. SFCG has been globally recognized for playing an important role in supporting countries’ peace processes, particularly in supporting the establishment of peaceful, free and fair elections.

In Liberia, SFCG undertook a nationwide civic and voter education program to empower Liberians, particularly women, youth, and refugees, to participate in deciding their country’s future. During the elections, SFCG and its partners coordinated a nationwide network of elections observers to assess the extent to which the elections were free, fair and transparent; to report incidents that had the tendency to pose problems; and to reduce the chances of rumors and fraud. Using mobile and satellite phones, the observers’ reports were broadcast live on national and local radio stations to audiences across the country. In the run-up to the second round presidential election, SFCG organized and aired the only debate between the two presidential candidates. Both candidates said that they had come to the debate because they trusted SFCG/TDS to present their statements and comments fairly.

With Ophelia Dahl just back from Liberia and Sierra Leone, Jeffrey Sachs, the economist and poverty guru, and Dr. Jim Cunningham, the virus detective, we’re reckoning with Ebola, still the...