Yesterday afternoon Brendan and I were walking through Harvard Square when we came across Alexander Brian Arredondo and his truck. The sight of his flag-draped casket and trailer filled with crosses and crutches was so remarkable that we had to stop and talk to him. 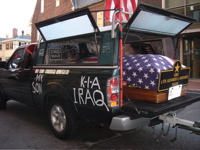 Arredondo keeps a flag-draped casket with his son’s picture, combat boots, and dog tags in the back of his pick-up truck. [Brendan Greeley] 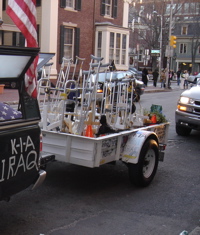 The trailer behind the truck is filled with crosses, crutches, and prosthetic limbs. [Brendan Greeley] 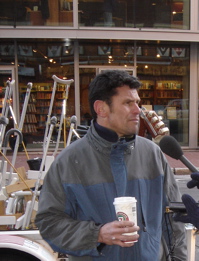 Arredondo’s son, 20-year-old Marine Lance Cpl. Alex Arredondo, was killed in action in Iraq in 2004. Upon hearing about his son’s death, Arredondo was so distraught that he set both himself and the Marine van that brought him the terrible news on fire.

Since then, he’s been driving around the country in a one-man pick-up truck protest. He’s met with political leaders like Hillary Clinton and Ted Kennedy, attended protests across the country with Cindy Sheehan, and parked his truck outside the city hall of Alexandria, Virginia on election day. He even scored an audience with Richard Perle, who Arredondo says gave him $1,000 towards a scholarship established in his son’s name.

Listen to last night’s protest show to hear excerpts of our conversation with Alexander Arredondo, and look here and here to see comments on last night’s thread from him and his wife.

Every morning we meet at 11:00 to talk about the previous night’s shows and what we’re doing for the rest of the week. We drink coffee. Mary tells...