A Passion for Cookbooks

A Passion for Cookbooks 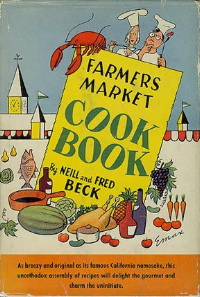 It’s the province of fantasy. Of possibility. Of heroics. Of being Prometheus: stealing fire from the gods and creating from it perfect short ribs (and perhaps a side of pureed potatoes and celeriac?). It’s the world of cookbooks, the original do-it-yourself guides, where even the impossible is broken down into a series of sequential and seemingly reasonable steps.

According to Jane Kramer, who wrote a wonderful appreciation of cookbooks (which is no longer available online) in a recent New Yorker, and is herself an eager collector, we’re mad for them. Fifteen hundred cookbooks are published in the U.S. every year, and millions are sold. (That’s in addition to countless magazines, and an increasingly active online cooking world.)

Kramer notes her own personal lure of cookbooks — “They promise to transform me,” she writes — but I get the sense that she’s not alone. I asked my friend Yair, who happens to be the best and most instinctive home cook I know, and who recently has been using one of Marcella Hazan’s simultaneously magisterial and homey books, to describe it. He wrote this on his subway commute home:

Hazan’s recipes are grandmother recipes. They strive for a perfection of craft, strenuously avoiding the tiresome personal touches that less talented and experienced cooks impose on eaters, who they would rather awe with their creativity than please with a simple, perfectly wrought meal. The highest achievement of Hazan’s recipes is that the flavors of the natural ingredients emerge with extraordinary limpidity. The essence of a carrot is never better expressed than in a Hazan recipe. Nothing ever clashes in her recipes, and I have never come across a single ingredient in any of her recipes that did not add a palpable, distinct, and absolutely necessary dimension. Hazan’s book is not a precis of a regional cuisine but a collection of timeless Platonic truths, incidentally discovered in the same corner of the earth, about ideal combinations of the earth’s bounty.

From a personal e-mail to David Miller

What he didn’t say in the e-mail but mentioned earlier on the phone is that he feels lost now. He recently gave his Marcella to a friend overseas as a gift, and feels adrift. (I should also add that Yair is the only person I know who would ever write “limpidity” on a Blackberry. Plus, he makes an excellent celeriac puree.)

Corby Kummer with Chris in the studio [Brendan Greeley]

There are as many questions for the hour as there are notions of the perfect chicken soup recipe. To begin: What does it mean to have a passion for cookbooks? Are there cookbook hounds out there who have no interest in cooking? So why are they — why are you, if you count yourself among their ranks — reading? (And a corollary: What are the hallmarks of the cooks out there who would never consider opening a cookbook? Pride? Mistrust? Illiteracy?) What are your favorite cookbooks — and which pages have the most stains? What’s your dessert island cookbook, assuming books were scarce but ingredients were plentiful?

And then there are questions about recipes themselves. Do you favor conversational or authoritative? Is there a difference between a perfect recipe and a perfect dish? Have you captured your own family’s passed-down favorites with the written word or is yours an oral tradition?

How has the Internet changed the way you approach recipes? Has it become a trusted — if uneven — sort of surrogate grandmother? The place you turn when the omlette won’t flop but the souffle will? Or do you stick with Julia, Marcella, and Nigella? Or perhaps you actually do consult your grandmother — in well-thumbed index cards or in the flesh?

Author, The Joy of Coffee and The Pleasures of Slow Food