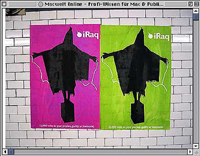 The world was shocked when the first photos were revealed. Now the ACLU is fighting the Bush administration for public release of a more gruesome set — this time with videos. We seem to be living in an age where pictures speak louder than words–or do they?

The ACLU’s thinking is that promulgating more gore is the best way to outrage a nation. But do we risk becoming immune to these images of abuse? How can we hold the Bush Administration accountable for unthinkable acts if these images leave us thinking not much of anything? In this hour we’ll take a close look at the imagery of torture; what’s gained, what’s lost if the Bush Administration has its way–or for that matter, if the ACLU does.

There’s a whole range of things to talk about here. Whether we’re suffering from fatigue, whether these images can still shock us. What the difference is in the impact of still image vs. video. There’s also the issue of documentation. With the proliferation of new technologies, this will increasingly be an issue. Now that every soldier has a video camera or a video phone, we’re dealing with the so called “Nokkia Effect.”

We also want to deal with the sensitivity of this administration to global efforts to bring these photos before various international criminal courts. We saw their

mustering of forces against Amnesty International, which shows they see this as potential evidence in international courts, and in civil cases as well. This affects their efforts to administer justice.

The media battlefield is the battlefield itself. Right now you have on the one side videos showing beheadings to intimidate and recruit. You have on the other side video of every single smart bomb hitting its target unerringly. It’s completely framed and edited on both sides. During the trials for the first World Trade Center bombings, when they started to investigate Al Quaeda, they found the number 2 or 3 guy was in charge of the websites. It’s a different epistemology of power.

Darius Rejali is a professor of political science at Reed College, author of Torture and Modernity: Self, Society and State in Modern Iran (Westview 1994), the forthcoming Torture and Democracy (Princeton 2005), and Approaches to Violence (forthcoming Princeton 2006),

The news of torture at Abu Ghraib came out in January 2003. This was before the photos, people were already aware of the situation, the government thought that the photos wouldn’t change anything. Little did they know how symbolic they would become. Particularly the image of the hooded prisoner. This is probably why they are afraid to reveal the next batch.

It’s disappointing that the Dept. of Defense isn’t going to release the photos but it’s not surprising. If this were behind us—this wouldn’t be such an issue. This is what is really troubling—it suggests that something is still going on.

There’s the McCain-Graham bill and Cheney wants nothing to do with it. What kind of message does that send? It is a totally reasonable bill and the Bush admin is vetoing it.

Len Rubenstein is the Executive Director of Physician for Human Rights

There are two dimensions to the ACLU lawsuit In a democratic society you have to hold your government accountable when the government is obviuosly behaving atrociously. The ACLU has to file this lawsuit because unlike 9/11 there is no independent review.

The ACLU wants these images released because they understand how powerful images are. We’re talking about the Department of Defense releasing 86 photos and four videos. If instead we were talking about 90 documents , 90 pieces of paper, would you even be having a radio show on this? Would you be talking to me right now?

Author, The Origins of Alliances

These photos are unlikely to have the same impact as the initial set of revelations. It’s old news. We’re used to the idea that there were abuses. Guantanamo is a black eye as well, the story has already broken. But this gets it back on page one. The sense is that all of these things have become staples of commentary, when someone wants to attack the US, they all spend some times pointing out various bits of misconduct.

However, our image abroad is not in very good shape already, and this can only make it worse. The standard concern for American unilateralism, the slow-motion collapse… Britain and Italy are already getting out. Another wave of revelations would make it harder for people stand shoulder to shoulder with America. People outside America are looking. You pay a price when you do anything wrong, but you pay a bigger price when you don’t appear to be fixing it. Bush went on Arab tv but he never said he was sorry. Concrete and costly steps do get noticed.

I think it’ll be damning to our reputation around the world. Even though someone should be in favor of freedom of information, an image means everything. In almost any country in the world, say, Pakistan, people are very attuned to a visual image, and also to things that they see that show the US in a bad light. Wherever you would have a radical group of people, it’s going to reignite the hatred.

Rehashing it isn’t going to benefit anyone. It’s going to be detrimental to the US and to our Allies, they’re going to be guilty by association, many of them have stuck by us. In their countries, the UK, Australia, anyone who’s supported us, with men, with words even, they will have to rejustify that support, based on the fact that this has happened. It’s already happened. It’s a story that’s going to make things worse. The horror, the outrage has all been done, hopefully has been corrected, that’s what we’re told. All we’re going to do is show you more of the same horror. If nothing had been done, I’d say “release them.”

Newly released images of naked prisoners, some bloodied and lying on the floor, threatened to revive public anger over abuse by U.S. guards at Abu Ghraib prison at a time...