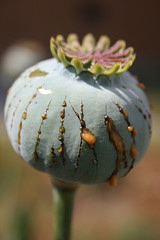 When we were talking about whether/how to cover the 5th anniversary of September 11th, we decided that a show on Afghanistan — which, like the rest of the media, we’ve neglected — could be interesting. It was our first front in the “war on terror,” so it begs the question: how are we doing?

This year Afghanistan grew a record-breaking poppy crop (92% of the world’s opium supply). Not unrelatedly, the Taliban is becoming increasingly muscular, especially in the south — so much so that it’s now almost as dangerous for American soldiers to serve in Afghanistan as in Iraq. It seems clear that the world failed to provide the post-war peacekeeping forces necessary to support Hamid Karzai’s democratically elected government (frequently accused of corruption and inefficiency) and to keep the Taliban from returning. The U.S., for example, has given vastly less development money and attention to Afghanistan than it’s poured into post-war Iraq.

The real question here may be what kind of opportunities we’ve lost. The war in Afghanistan was, after all, generally supported by the rest of the world — and could have been a model of cooperation. There have been some successes (roads, schools, hospitals), especially around Kabul, and they make you wonder what we could have achieved with our full attention. Osama bin Laden captured? A social and government infrastructure that could have kept the Taliban at bay? A real reduction of drug-funded terrorism? What do you think?

Pakistani journalist based in Lahore

Writes for the Daily Telegraph and The Wall Street Journal, among others

Covered Afghanistan and South Asia for The New York Times, 2001-2005

Author, An Afghan Symbol for Change, Then Failure, The New York Times, 5 Sept 2006

Covered the war in Afghanistan in 2001

Author of upcoming piece on Afghanistan in this weekend’s Globe

Ahmed Shuja, “Staggering” Increase in Afghan Drug Cultivation, MyScribbles: Write-Ups of an Afghan, September 5, 2006: “Since 2001, when the Taliban put a highly successful ban on cultivation, drug production has been steadily increasing.”

Linda Barnes, Summer 2006 in Kabul, A Midwife in Kabul, August 24, 2006: “As America’s focus turns toward other ‘hot spots’ Afghanistan is being weaned off American reconstruction funding, but Afghanistan remains 100% dependent on those funds.”

Sohrab Kabuli, NATO and Important mission in Afghanistan, Afghan LORD, August 10, 2006: “Recently insecurity and suicide attacks against coalition forces and Afghan forces are not stopped but increasing in southern Afghanistan.”

David Rohde, An Afghan Symbol for Change, Then Failure, The New York Times, September 5, 2006: “Today, Little America is the epicenter of a Taliban resurgence and an explosion in drug cultivation that has claimed the lives of 106 American and NATO soldiers this year and doubled American casualty rates countrywide.”

Ahmed Rashid, Afghanistan: On the Brink, The New York Review of Books, June 22, 2006: “How is it, then, that Afghanistan is near collapse once again? To put it briefly, what has gone wrong has been the invasion of Iraq.”

BBC News, Pakistan urges joint terror fight, BBC News, September 6, 2006: “Pakistan and Afghanistan have to fight ‘the scourge of terror and extremism’ together, Pakistani President Pervez Musharraf has said on a visit to Kabul.”

It was clear from last night’s show that Ahmed Rashid, David Rohde, and Charlie Sennott — talented and curious reporters all — took away much the same message from their...