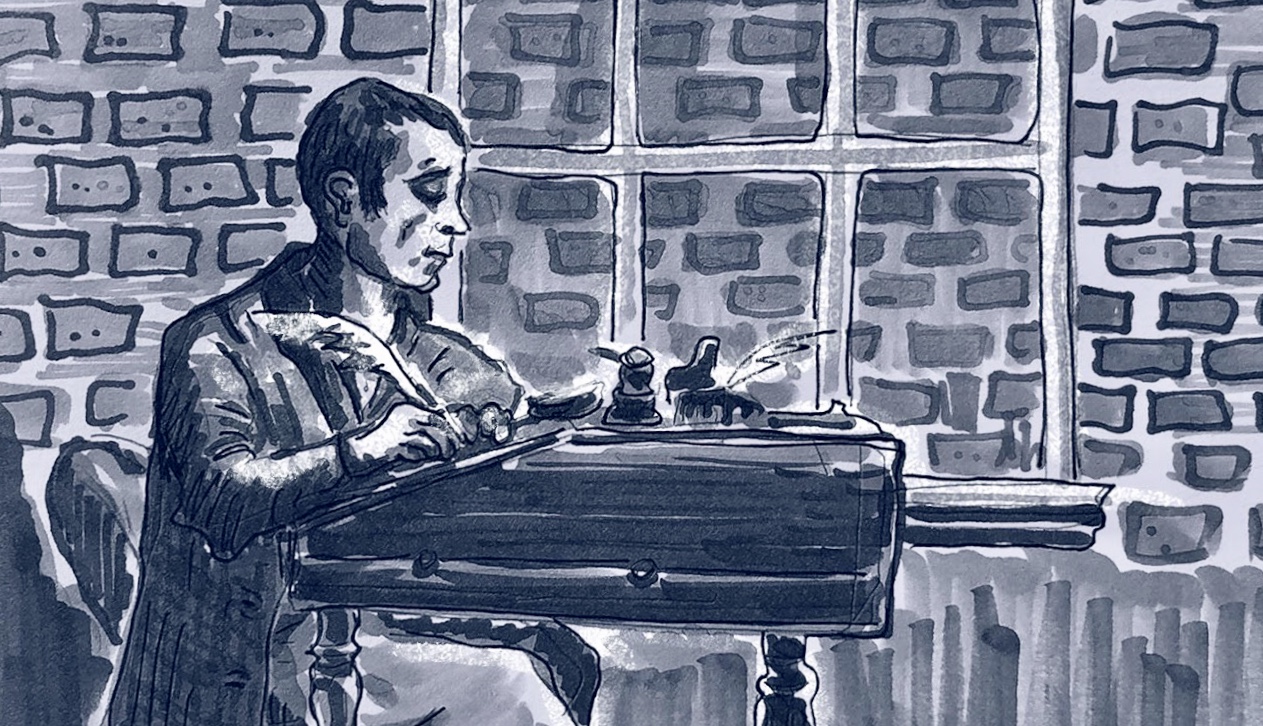 Herman Melville, at his 200th birthday, is the American Shakespeare if only for his epic prose poem Moby Dick, or The Whale. That’s Maximum Melville; we’re celebrating, instead, his short story “Bartleby, the Scrivener.” It’s the perfect miniature of the same genius: the story of a rebel clerk on Wall Street. It opens with hints of comedy; it ends in tragedy and still today, it’s a mystery. “I would prefer not to” is Bartleby’s signature line, turning down office assignments. It’s almost all he can say, but where are those five words of refusal coming from? And for whom is this Bartleby speaking? “I would prefer not to” is Bartleby’s slogan—as familiar on Herman Melville T-shirts as the words that open Melville’s Moby-Dick: “Call me Ishmael.” But how different is the short story, “Bartleby the Scrivener,” from the great American novel—except that they’re both perfect Melville, in his 200th-birthday season. Bartleby appeared two years after Moby-Dick, in 1853, from Melville, who was still young at 34. It’s 30 pages instead of 600, far removed from the high seas, and more nearly manageable in one radio hour. Bartleby is a cadaverous and solitary young copyist (pre-Xerox machines) in a claustrophobic Wall Street law office. He’s the white-collar drone who opts out, refusing orders. Meaning what? Do we take him as a victim of class oppression, or a figure of extreme and individual depression? We’re open to the argument this hour that Bartleby stands for black America in the nineteenth century, and also he’s modeling a way out of social media and the commercial capture of our attention, and also that he spoke for Melville himself, a prophetic artist facing the futility of his writing vocation which would bring him almost nothing in the way of money, praise, or readership in his lifetime.

Guest List
Jay Parini
Author of The Passages of H.M.: A Novel of Herman Melville.
Jenny Odell
Author of How to Do Nothing.
Nikil Saval
Author of Cubed, co-editor at n+1.
Wyn Kelley
Professor of Literature at MIT.
Gerald Howard
Executive editor at Doubleday Books.
Reading List
Bartleby and Manhattan
Elizabeth Hardwick

After last night’s show I went home and read aloud with the family Melville’s famous and ever-amazing Chapter 42 in Moby-Dick, “The Whiteness of the Whale.” It is indeed...