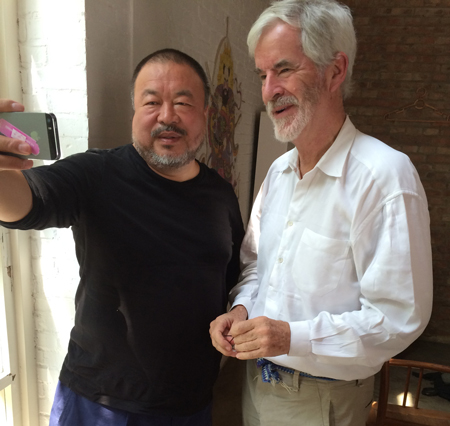 Not perhaps since Alexander Solzhenitsyn in the Soviet Gulag has there been a dissenting artist who got to be as famous as the government that hounds him. But Ai Weiwei’s situation is one-of-a-kind.He’s a scathing oppositionist who argues with me that China’s moral, natural, aesthetic, philosophical and family foundations have been “completely destroyed.” At the same time he is a celebrity, the virtual mayor of an industrial district in Beijing that’s become a thriving village of modern painters, sculptors, studios and galleries.

At one cheerful turn in our gab, he’s reminding me about the Chinese gift for breaking rules, for thinking outside the box, for double thinking, even under Communism: “Yeah, that’s the culture. Chinese are quite intelligent, witty, and create their own liberal space. Even in very extreme conditions, they still can achieve some kind of happiness or self, some kind of confidence, so that makes Chinese culture very different from others.”

Ai Weiwei is China’s official scare-word and favorite non-person. He’s what Solzhenitsyn called a “second government.” But let’s remember: the embattled democrat and artist of ideas was a star consultant in the design of the “bird’s nest” stadium built for the Beijing Olympics in 2008. He sees himself naturally as a leader and a patriot. He’s mastered what people say is a very Chinese use of paradox and contradiction. He refers to his testing of the limits as a kind of performance art. We met his wary sort of humor and warmth on the way into his walled garden. He parks his bicycle at the gate with a basket full of fresh flowers as a greeting each morning to the government spies who ‘mind’ him and who, it turns out, took our picture on the way out. For almost an hour the conversation flew around a big table in the traffic of Ai Weiwei’s studio. Maybe the worst disaster in China, he said, is the flood of migrant workers out of farm villages into cities where they have dangerous jobs, small pay, no benefits and no residency rights – no rights to city schools, for example, for their kids. “This is just modern slavery” for the migrants, said Ai Weiwei. For the broken families left behind, it’s a desolation.

He says our friend the novelist Yu Hua is “absolutely right” about the continuity between Mao’s brainwashing Cultural Revolution and the booming Market Revolution today. The key links, he concurred, are violence, lying propaganda, and a tiny monopoly of political power. Just off the high-speed train from Shanghai, I confessed I was dazzled by the smooth ride at 300 kpm and by the orderly green abundance in the farmlands. “Wouldn’t this government be good for – say – Egypt?” I asked. But he’s heard the line that China is developing faster than Brazil, or India, or Egypt, and he’s not impressed. “How do you give young people hope, imagination and creativity,” he asked. “Those are the inner structures I think a lot and worry about.” As we wrapped up, he said I’d made him sound like a complainer, just a critic. We could have talked about the weather, he said, “or food, or sex.” Next time we will.

And what did I take away? Mainly gratitude to this brave man for his stubborn, almost fearless attachment to the soul questions: he’s reminding us all what it costs to stand out as an individual, and for a society to stay free, alive, critical, human.

The People’s Republic has arrived and is applying for co-trusteeship of the globe. We got a good look at the co-trustee, China’s enigmatic president Xi Jinping, through the deep sourcing...