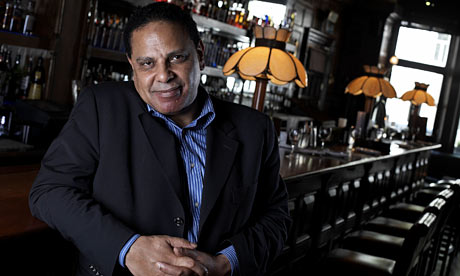 "Novelists and doctors are both interested in understanding human pain."

CAIRO — Alaa Al Aswany, the best-selling novelist in the Arab world, sticks to his day job in dentistry. We meet in his modern clinical suite where he starts writing before office hours every morning at 6:30. I greet him at 9 in the evening with the thought that he’d written the book that made Egypt’s revolution necessary.

The Yacoubian Building (2002 in Arabic; 2006 in English translation and also a big-budget Egyptian movie) opened a cross section on a Downtown Cairo apartment house, from doorman’s stool to rooftop teeming with poor folk from the country. The links in life and love (gay and straight) inside the building are manipulation, predation, betrayal, heartbreak and vengeance. They’re neatly matched outside in the thuggy, druggy politics of the moment, and in the humiliations that turn an aspiring young policeman into a jihadist. The Yacoubian Building made the private-public connection between torture in the name of love, and torture in the police station. As a chronicle of the Mubarak years in Egypt, it’s a readable shocker, still a call to action.

“Literature and medicine,” Alaa Al Aswany observes in conversation, “are one profession with two aspects, in that novelists and doctors are both interested in understanding human pain.” His job, he says, is feeling people directly — in the dentist’s chair, in the street, in the cafes. He told Pankaj Mishra three years before the Tahrir Square revolution: “I think we are in for a big surprise.” Long ago, he tells me, “I felt Egyptians were going to need to change the situation. And that’s what happened.” He is embroiled today in the revolutionary politics of his country — challenging the Muslim Brotherhood and President Mohamed Morsi in newspaper columns, also in his long-running Friday open forum on books and public issues, and in a roaring speech to Tahrir Square masses the other day. His signature line everywhere is his response to “Islam is the solution,” the Brotherhood’s slogan. Alaa Al Aswany never fails to say or write: “Democracy is the solution.”

Not the least of what has to change now, he is telling me, is the United States policy that supported Morsi and the Brotherhood in last summer’s presidential election — and that, in the form of Hillary Clinton, embraced Morsi personally on the eve of his reach last month for one-man rule. I am quoting back to Alaa Al Aswany one of the best-remembered speeches in The Yacoubian Building, in which a political fixer in the Mubarak gang explains their theory of rule:

People are naive when they get the idea that we fix elections. Nothing of the kind. It just comes down to the fact that we’ve studied the Egyptian people well. Our Lord created the Egyptians to accept government authority. No Egyptian can go against his government. Some peoples are excitable and rebellious by nature, but the Egyptian keeps his head down his whole life long so he can eat. It says so in the history books. The Egyptians are the easiest people in the world to rule. The moment you take power, they submit to you and grovel to you and you can do what you want with them.

The character who spoke that line in the novel is in prison by now, Alaa Al Aswany says with a grim chuckle. But is it possible, I push him, that the American government is still banking on the old theory?

Of course the U.S. foreign policy to us has been terrible for 50 years. We had the worst moments of our lives because of the U.S. foreign policy. But I’m very proud that Egyptians are absolutely able to see the difference between U.S. foreign policy and Americans. We love Americans in this country. Even during the Iraq war, American people were safe here because people realized that they are not decision makers in their government. The point here is that… America should stand for its principles much more than standing for the interests of the big guys… I’m sorry to say I notice now that America is almost repeating the same strategy with Mr. Morsi. Mr. Morsi has been elected president and has now obviously and in a very visible way decided to be a dictator. He stopped the law. He made the constitutional declaration to cancel the judges… Today the spokesman of the American administration says that the constitutional declaration is an ‘internal issue,’ exactly what they said about Mubarak… What we are expecting but never had from the Western governments is just to leave us alone. We are going to do our democracy for ourselves. But do not support the terrible dictators! That’s what happened with Mubarak. He has been supported by the Western governments for decades, right? Everybody knew what kind of dictator he was. But this question of ‘interests’ — he was ‘okay’; he was doing what Israel wanted; and there was another assumption that he was the barrier against Islamism; but he was not the barrier, he was the reason for the fanaticism in Egypt. That’s clear in my novel… The point here is that what we need from the Western governments is not to support Arab dictators any more…

This man is fascinating across the board: on the strong (but neglected) foundations of Islamic Modernism in the leadership of Muhammed Abduh (1849 – 1905); on two Egypts in the present day — “lucky Egypt and the rest of the pyramid… another Egypt in the dark”; also on Israel’s stake in a real Egyptian democracy; and “the revolutionary moment” still beyond scientific analysis, “when people become different people and are willing to die for freedom and refuse to compromise with dictatorship. This is the real achievement of the revolution in Egypt — that people are no more scared. And it’s irreversible. People will not go back.”