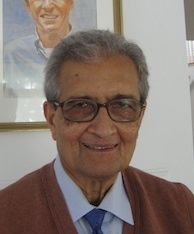 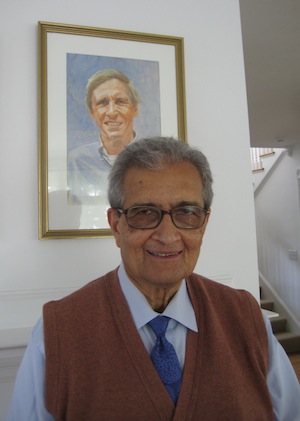 Amartya Sen at home in Cambridge, before his hero John Rawls

Amartya Sen, when I ask about this “Year of India,” quips that the biggest change in the “new” India is in our non-Indian heads. Meaning: that common wisdom has finally shaken off the British imperial canard that “old” India was a backward pre-industrial scene before the East India Company, in the 17th and 18th Centuries, rescued it for civilization and modernity.

India’s grandest eminence outside the subcontinent is satisfied that we’ve all absorbed the news that behind the modern Bangalore boom lie 3000 years of an “accounting culture” and India’s own imperial trading history. The name of Singapore, he notes, comes from the Sanskrit for “City of Lions.” So “all those people who say: the West is materialist and business-oriented, Indians are spiritualist and thought-oriented, are talking absolute nonsense.” Neither are those “new” Indian stakes in software and biotech all that new, or all that Indian. Many of the great Indian success stories were incubated in Silicon Valley, starting in the 1950s, and at MIT, where Nehru got the model of the endlessly fertile Indian Institutes of Technology. So Kipling is dead and buried; the twining of East and West, the meeting of the twain, is no surprise anymore. The unfolding story, in Amartya Sen’s telling, is Open India.

Part of the reflection of Open India is the willingness to accept that you don’t have to belong to the mainstream [80-plus percent Hindu] in order to be counted as a genuine Indian. As Rabindranath Tagore said in two quite famous statements: one, that anything that we admire, no matter its origin, instantly becomes ours. And the other, similarly, that any person who comes from abroad and is ready to live the kind of life that people lead in India is instantly accepted as being Indian. Because a lot of Indians are going everywhere in the world, and they’re traveling as a kind of modern Jew of the 20th century and 21st century, India doesn’t get enough credit for the fact is that there has been more immigration into India than almost any country in the world — for one thing, tens of millions of Bangladeshis. Even though people grumble about it… you don’t see the kind of hysteria about it that’s going on Europe, for example, or the United States. That anger may yet come, but it hasn’t been a part of traditional India at all. The fact is the boundaries are porous between India and abroad and it’s served India very well. I think India booming would not have happened but for the openness of the educational sector, of the high tech sector, and the big booms, the informational as well as biochemical and medical, have come very much from a dialectic interaction with the West.

Amartya Sen warned famously (five years ago) that India is at risk of becoming “half California, half Sub-Saharan Africa.” To me he says he was offering tabloid India a caution, not a prediction. In conversation these days, Amartya Sen sounds half Victorian gent, half liberal social critic, but not a worried man — not about India’s engagement with the United States in Afghanistan, for example; and not urgently concerned about the decline of the once sacrosanct “village India.” He doesn’t “miss” village India, he said, “because it’s not gone.” From his father’s house 100 miles from Calcutta, “I walk half a mile, and I’m in rural Bengal.”

The villages are not gone, but the tragedy isn’t so much that [village India] is changing and going, but it’s not changing and not going, in the sense that we want every village with schools, we want them with hospitals and primary health care institutions…. These things are not happening. So my grumble isn’t that the Indian villages are changing; my grumble is that it’s not changing fast enough. I have nothing against village life. I very much enjoy…getting on my bike and taking 15, 20 miles of bicycling through the rural areas. Absolutely wonderful! But I would like to see dispensaries, primary health care, schools there. And that’s not happening fast enough. That’s my grumble. And sometimes when I complain that India is becoming bifurcated between half California and half Sub-Saharan Africa, my complaint is that the line is unfortunately often rural and urban. It’s not just that, because there are a lot poor people in the urban areas as well, it’s a more complicated line, but the rural-urban division, that’s a very big division that we have to keep in mind.

Amartya Sen in conversation with Chris Lydon in Cambridge, May 7, 2010.

I thank him for an hour’s discursive gab with “an old fashioned Indian wiseman.”

His last word: “You got it exactly right.” 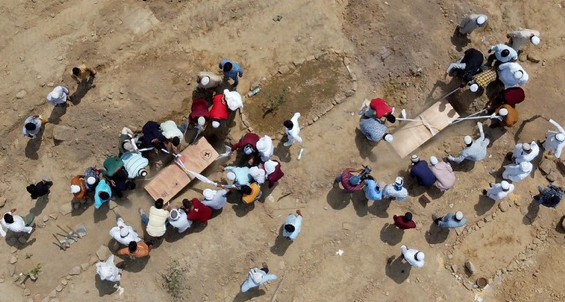