The Vice President has been on the record talking about the fact that … since Watergate, the Presidency has suffered an erosion of power. And I think that part of that view is that there’s been too much information made available. 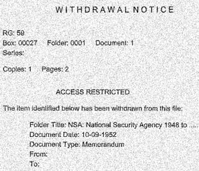 From The National Security Archive’s press release Declassification in Reverse

After the Vice President’s post-shotgun interview with Brit Hume, a lot of people picked up — among them Steve Clemons of The Washington Note — on Cheney’s admission that the Vice President has the authority to declassify information. It wasn’t an admission, actually, so much as it was a simple, unashamed declarative statement. On Februrary 21st, the National Security Archives — a non-governmental organization that collects documents released under the FOIA — announced that several agencies had been reclassifying documents that had already been made public.

Have we lost control of what we know, and what we’re allowed to know? By any measure, the Bush Administration has put a premium on secrecy; one of its first acts on assuming office in 2001 was to extend the period during which Presidential records are kept under lock and key, effectively making secret some things we should now know about the Reagan administration. The White House has not been particularly forthcoming with Congress or the 9/11 Commission; as Knight-Ridder’s Jonathan Landay pointed out in a pre-interview this afternoon, senior members of the Republican caucus have recognized, in their opposition to the UAE ports deal, that policy made in secret can carry a price with voters.

But this obsession with secrecy can’t just be a desire to cover up malfeasance. As Cheney has pointed out directly, this administration believes that the executive branch’s natural constitutional power has been curtailed since Watergate; is all this secrecy just a puffing of constitutional muscle? Do we need to trust the executive in a time of war? Are there long-term dangers to secrecy that we haven’t begun to recognize yet? What about all those revisionist Reagan histories that never got written?

Click to Listen to the Show (24 MB MP3) The forged intelligence documents, available in their entirety at Cryptome [Cryptome] We saw, in the last week, the re-emergence of the Rome connection:...

Click to Listen to the Show (24 MB MP3) Reagan did it. [Ronald Reagan Presidential Library] Our Presidential Power show never materialized, despite a lot of exhortations from our loyal readership, but...