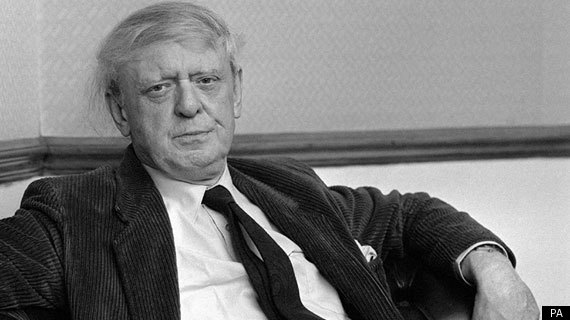 Paul Phillips is leading us here in a long digression — a step into yet another alternate universe of the odd genius who wrote A Clockwork Orange.

Anthony Burgess thought his famous tale (and movie!) of mindless mayhem was perhaps the least of his efforts, but what he really wanted apart from his endless book production — essays, plays, criticism, and novels of all sizes and styles — was to be understood for the music he wrote. The bet here is that the Burgess symphonies, songs and chamber music that Paul Phillips is sharing will not make the world forget Burgess’ Enderby series of novels, or his fantasy on Shakespeare’s sex life, Nothing like the Sun, or his all-encompassing “life” of a 20th Century expatriate English writer, Earthly Powers. But let’s hope anyway that surprise and delight are reason enough to digress on multiple senses and gifts — reason enough to grant Anthony Burgess’s heart’s desire. “I wish,” he said, “people would think of me as a musician who writes novels, instead of a novelist who writes music on the side.”

Anthony Burgess never forgot being stricken by music as a tot — by “a quite incredible flute solo” he heard on the radio, “sinuous, exotic, erotic.” It turned out to be Debussy’s “Afternoon of a Faun.” It was a “psychedelic moment… a recognition of verbally inexpressible spiritual realities,” and it triggered Burgess’s self-education at the piano, then in composition and orchestration. His family persuaded him that there was no money in music, but his artistic life became a synesthetic web of words and music — much as Thomas Mann rendered the experience of Adrian Leverkühn in Doctor Faustus: “… music and language, he insisted, belonged together, were fundamentally one. Language was music, music a language, and when separated, each always recalled the other, imitated the other, made use of the other means, always to be understood as the substitute for the other.” Anthony Burgess by David Levine, from The New York Review of Books

I agree that the musico-literary analogies can be pretty tenuous, but in the widest possible formal sense — sonata form, opera, and so on — we’ve hardly begun to explore the possibilities. The Napoleon novel I’m writing apes the Eroica formally: irritable, quick, swiftly transitional in the first movement (up to Napoleon’s coronation); slow, very leisurely, with a binding beat suggesting a funeral march for the second… As for the reader having to know about music, it doesn’t really matter much. In one novel I wrote, “The orchestra lunged into a loud chord of twelve notes, all of them different.” Musicians hear the discord, non-musicians don’t, but there’s nothing there to baffle them and prevent them reading on. I don’t understand baseball terms, but I can still enjoy Malamud’s The Natural. I don’t play bridge, but I find the bridge game in Fleming’s Moonraker absorbing. It’s the emotions conveyed that matter, not what the players are doing with their hands.

… I still play jazz, chiefly on a four-octave electric organ, and I prefer this to listening to it. I don’t think jazz is for listening but for playing. I’d like to write a novel about a jazz pianist or, better, about a pub pianist, which I once was, like my father before me. I don’t think rock leads on to a liking for jazz. The kids are depressingly static in their tastes. They do so want words, and jazz gets along very nicely without words.

… I enjoy writing music precisely because one is divorced from “human” considerations like belief, conduct. Pure form, nothing more. But then I tend to despise music just because it is so mindless. I’ve been writing a string quartet based on a musical theme that Shakespeare throws at us, in sol-fa notation, in Love’s Labour’s Lost (the theme is CDGAEF), and it’s been pure, bliss. I’ve been thoroughly absorbed by it, on planes, in hotel bedrooms, anywhere where I had nothing else to do and there was no bloody Muzak playing. (Don’t the Muzak purveyors ever think of the people who actually have to write music?) Now I’m a little ashamed that the music engages nothing but purely formal problems. So I oscillate between a hankering after pure form and a realization that literature is probably valuable because it says things.

Composer-Conductor Paul Phillips, Senior Lecturer in Music at Brown University, is leading the Brown Symphony Orchestra in Anthony Burgess’ “Mr. W. S.” this winter. With the Manchester University Press and Macmillan, he has just published A Clockwork Counterpoint: The Music and Literature of Anthony Burgess.