Astronaut Contraption: We Have a Winner!

Astronaut Contraption: We Have a Winner! 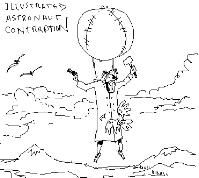 A couple weeks ago we asked you to send us your ideas for interesting contraptions to make out of the paraphernalia that astronaut Lisa Nowak brought with her on her long strange trip to Orlando. The comment thread got a little dark and literal, but you had some great ideas. Here is our favorite, with illustration, sent in by R. Ryan Anderson. (Click on the image for a larger version.) Congratulations to all!

The large garbage bags were to be weaved together with rubber tubing to form a giant air bladder which would be inflated with hot gas–produced by a spark from the firing mechanism of the BB gun held into the aerosol stream of the activated pepper spray canister.

Attaching her balloon to the cloth loops of her trench coat, the cosmonaut has effectively created a personal atmospheric flotation device. She could then navigate by map across boarders, oceans, mountains, dangerous mountain lions, vampires and saber tooth missionaries.

Despite her offensive capabilities such as: steel mallet, knife, BB gun, and biological weapons (read: expended adult diaper bombs) she was still vulnerable to attack by pterodactyl. Thats where the disguise came it handy. Using the wig, she was able to rig a very crude fake beard and mustache. No two pterodactyls are as stupid however so she would need a secret-reserve back up plan… You guessed it: six latex gloves that she could quickly inflate to sexually humiliate flying aggressors.

RicHard Ryan Anderson, in a comment to Open Source, February 8, 2007.

Make Your Own Astronaut Contraption

CENTCOM Has the Personal Touch

[At CENTCOM,] we’re well known in the blogosphere– we post stories all the time. Like maybe there’s a dialogue going in a blog about starving children in Iraq, and we’ll...