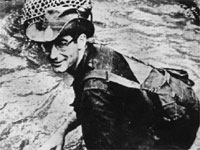 At Dinner with David Halberstam

At Dinner with David Halberstam

David Halberstam’s life seems to have flashed before him in a last supper at Chez Panisse in Berkleley last Saturday night, in the company of other long-form journalists of distinction: Orville Schell, dean of the Berkeley graduate program in journalism; his wife, filmmaker Liu Baifang; Mark Danner of The New Yorker and The New York Review of Books; and the radio documentarian Sandy Tolan of Berkeley and NPR. We will recapitulate the dinner conversation on Open Source tonight. From the participants it sounds like a combination of master class, bitching session, retrospective on the journalism of the Iraq war, and David’s own intimations of mortality after a cardiac “event” last fall — all of it delivered with David’s passionate and rather grand independence of view, his peculiar combination, as Sandy Tolan notes, of star power and innocent curiosity; his critical and obsessive love of the craft of reporting; and his devotion to the people who practiced it.

We talk often on Open Source about institutional journalism and its afflictions. Real journalistic institutions are something else entirely. David Halberstam was a free-standing pillar — never of “personal journalism,” but of civic journalism with his own signature on it. Ralph Nader, who went to high school with Halberstam in Winsted, Connecticut, shook his head with me today in a chance meeting in Cambridge. “Can you imagine,” Ralph said: “David Halberstam, age 29, cabling The New York Times from Vietnam to say that if the foreign desk wouldn’t take his word on the story he would ‘resign — repeat resign’ from the paper.” Which he did, of course, eventually. But on newsprint and in hard covers, he could be counted on for one man’s anti-institutional observation of war, politics, culture–including sports. With his friend and mine J. Anthony Lukas, another Times refugee best remembered for books like Common Ground, Halberstam founded [more], the journalism review. His doctrine, his enthusiasm and his example in relentless reporting may be far more important in the long run than fame of Bob Woodward and Carl Bernstein.

So we pick up many threads of affection and thanks in table talk about David Halberstam this hour — wishing he were adding his quotient of gossip and outrage.

Author, The Lemon Tree: An Arab, a Jew, and the Heart of the Middle East

David Halberstam, Brave New Review, A Letter To My Daughter, originally published May 2, 1982: “If anything, knowing America’s faults and imperfections, perhaps I love it more than your grandfather and great-grandfather, for perhaps I love it more wisely. During all those years, I kept on my desk a small quote from Albert Camus which he had written during France’s war in Algeria: ‘I should like to be able to love my country and love justice.'”

Dexter Filkins, A Skeptical Vietnam Voice Still Echoes in the Fog of Iraq, The New York Times, April 25, 2007: “During four years of war in Iraq, American reporters on the ground in Baghdad have often found themselves coming under criticism remarkably similar to that which Mr. Halberstam endured: those journalists in Baghdad, so said the Bush administration and its supporters, only reported the bad news.”

Sally Cruickshank, David Halberstam crossed my path, Sally Cruikshank, April 25, 2007: “When I was in eighth grade I was the feature editor for the school newspaper, and very serious about pursuing a career as a newspaper writer. I was invited to go to a special conference in New York, for school newspaper editors, the culmination of which was a luncheon at a big old hotel in Manhattan. David Halberstam, the famous journalist and author who died this week, was the guest speaker.”

Joe Strupp, NY Times Had To Scramble For Halberstam Obit, Editor and Publisher, April 24, 2007: “Obituary Editor Bill McDonald, who has at least 1,000 pre-written obituaries on file, said Halberstam’s good health and active lifestyle made him seem less likely to require an obituary soon, despite being 73 and a legendary Times figure.”

Derek Catsap, A Bit Too Soon?, dcat, April 25, 2007: “He loved to work, which fueled his productivity. His missteps were never a function of meannness or gratuitousness — his book was a mess, but there is no doubting Halberstam’s seriousness and commitment to civil rights and his profound respect for the movement’s activists — and oftentimes his level of commitment led to his finest work.”

dew, David Halberstam, 1934-2007, Buddy’s Books and Bait, April 25, 2007: “‘The Best and the Brightest’ is something everyone should read. While it is about America’s tragic descent into the Vietnam quagmire, it’s really about much more than that — our flawed system, American hubris, the lack of understanding about the world and its people.”

Scott Simon, An Essay on the Late David Halberstam, All Things Considered, April 24, 2007: “Once I told David about a colonel in El Salvador who awarded me a sour smile when I asked what he thought was an impertinent question. ‘Who do you think you are,’ the colonel asked. ‘David Halberstam?’ David laughed and said, ‘My boy, as you travel around the world, I think you will find my name is ‘horse’s ass’ in many languages.'”