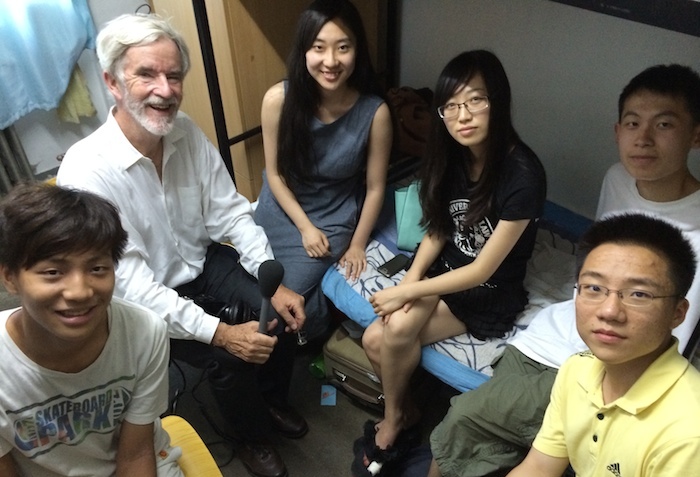 At Peking University: the Rising Generation

At Peking University: the Rising Generation

Max, a student from Hong Kong at Peking University in Beijing. What I went least prepared for was the openness of Chinese people in what we call a closed society. So the last audio postcard from this trip is a 10-minute distillation of a conversation that sprang up like music to my ears in a dormitory room with five students at the venerable Peking University in Beijing. These are aspiring middle-class kids – a random sample of the top of the heap. Nobody here is bent on being a billionaire. All voiced versions of a searching interior life. Nobody mentioned political participation as they listed their ambitions. But social idealism infuses their talk. Several volunteered that inequality – of incomes, education, opportunity – is the blight on their society, a problem their generation will have to address. None expressed the slightest confidence in ideological communism. They sounded more embarrassed than outraged by official controls on information (of which they have plenty) and expression (in which they feel individually free). They credit their government with overall effectiveness. And they all spoke comfortably of loving their country and their moment in its history.

China is searching, the China we see today is shaped by different factors: traditional Chinese civilization, and also the western culture since 1840, when Great Britain launched a trade war and broke the gate of the Qing empire. [By now] it’s another aspect of tradition… also the communist ideology… The problem for China is we lack a national philosophy. We as a people, as a nation. We lack a philosophy that supports the spiritual life of our citizens. It’s a problem in the whole country.”

Nick, a philosophy major, whom I’ll remember specially for his short list of cultural treasures for the proverbial desert island: Collected Poems of the Tang Dynasty, Hemingway’s Farewell to Arms, and Brahms’ Symphony No. 3.

There’s societal pressure, and family pressure, to do financially at least as well as your parents. That’s one of my anxieties, and a big anxiety of a lot of my friends. You’re supposed to do well and your parents have paid a lot for your education. But you don’t know what you want to do. I haven’t declared a major yet. I’m focused on finding something I really enjoy doing.

Rebecca, a rising sophomore at Carleton College in Minnesota.

I think it’s not difficult for us to find good jobs. To earn money is not important for us, we can earn so much money. The most important thing is to find ourselves, to be ourselves.

Flora, pursuing a double degree in law and Chinese literature.

I read American books, we talk about the system of American politics almost every day. America is everywhere. I want to have my graduate education in America. It’s necessary to get to know and understand America — necessary to understand the whole world. I don’t like nationalism, and I don’t like to emphasize enemies. I think we have to cooperate, but we are not genuine friends. But we have to cooperate with each other.”

Payton, who rounded up his friends for us at the University of Peking.

Special thanks to Jiang Xueqin, an activist teacher and school reformer, for introducing us on campus.