Glenn Loury shares an intimate sort of rumination here on who Barack Hussein Obama really is — or who he will turn out to have been. What will small things, like the choice of the Sidwell Friends School for Sasha and Malia, or big things like the war in Afghanistan, end up telling us about him? 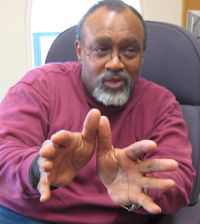 These are speculative questions that millions of us ask ourselves about the relation between man and office, between conscience and power, between complexion and consciousness, between the legacy of memory and history-in-the-making. They are thought experiments and mind games most people play alone or privately. But Loury seized the moment to think out loud about questions that will surely shape the Obama biography someday: what was Barack Obama’s link to black struggle? Where did he place himself in relation to the “black prophetic tradition”? How did he expand and complexify the paradox of African-Americans as both “insiders” and “outsiders” from the beginning of the long American saga? In the extraordinary Obama story where do we see reflections of a much larger swath of Americans — of the “affirmative action” generation, of what Obama and others have called “the Joshua generation”? For teachers like Glenn Loury who taught the Obama generation through a vast expansion of “black studies” of every kind on campus, the puzzle is: what are the lessons that stuck?

Loury feels a collision coming between the black prophetic tradition…

It is anti-triumphalist vis-a-vis America’s role in the world, and deeply suspicious of city-on-a-hill back-slapping and congratulation… It has an anti-racist tilt, an anti-militarist tilt, maybe even an anti-nationalist tilt…

… and the contraditions of American imperial power that President Obama has inherited:

Afghanistan is where empires go to die, as the cliché has it. Afghanistan is a deeply troubling engagement for us, and it could end up being Obama’s Vietnam.

Palestine, Gaza. Refugees for six decades? A great military power — talking about the Israeli Defense Forces — over a basically prostrate people, [with] American weapons? Cluster bombs? White phosphorus? F-16s? God what a morass for the United States of America. I’m not talking about Zionism now. They have their issues, and they have their imperatives, and they will do what they’re going to do about their agenda. I’m talking about the United States of America. I’m talking about justice in the world. I’m talking about what side of history we stand on. I’m talking about the American experiment. “Let freedom ring!” “Let justice roll down like a mighty stream!” We eschew racism and the domination of people based on ethnic and racial characteristics. We basically have an open border with Mexico because we won’t be the kind of country that shoots people when they try to cross a river for opportunity. We have a Constitution that says civil authority, the government, the police, cannot be rooted on ethnic fealty or religious conviction…

Glenn Loury is reminded in mid-conversation of a book that an African-American pioneer at Harvard, Martin Kilson, meant to write but never did. It was to be sub-titled “Neither Insiders Nor Outsiders.”

African-Americans were not insiders for the obvious reasons: your nose was pressed against the candy-store window, you don’t quite have equal opportunity. But they weren’t outsiders either — for 6, 7, 8, even 10 generations, sons of the soil here, as American as anybody could possibly be. And so therein lie the conundrum and the paradox. Now it seems to me that the central message of the last 25 years is that we’re sliding into becoming insiders, okay? What kind of insiders are we going to be? That’s the question.

Glenn Loury is professor of economics at Brown, a child of the South Side of Chicago, an MIT Ph.D, a Democrat who preferred Hillary Clinton for the presidential nomination, an intellectual who’s moved from right to left in the black commentariat. He’s giving just one man’s answers here to what may be everyman’s questions.