Belarus Rocks Out for Change

Belarus Rocks Out for Change

Rock is protest. Everywhere. Not only in Belarus.

Milinkevich… arrived half way into the concert that took place on Bangalore Square. Speaking in Belarusian, in itself an act of defiance, he pumped up the crowd, railing against the current regime for its crack down on basic freedoms. Closing his speech he declared that all Belarusians should be able to live in a free and just society where they can always listen to “beautiful Belarusian rock!” 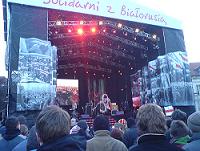 Should this week’s protests turn into a full-fledged revolution, alternative rockers N.R.M. will provide the soundtrack. N.R.M. loosely translates as “Independent Republic of Dreams.” In Belarus, “slandering the president” can land you in prison; passing false information that might harm the state to foreigners (say, by playing such slander on the radio) could land you there too. Police wallpaper the streets with the friendly reminder, “We are always near you.” So even with a new law that says 75% of all music played on Belarusian radio has to be performed by Belarusian artists, N.R.M. doesn’t get much airtime. Says N.R.M. headman Lyavon Volski, “Now [DJs in Belarus] are starting to look for Belarusian roots among western singers. Apparently, Aerosmith’s Steve Tyler has some.”

Lukashenko (or, as supporters call him, Father, or Bat’ka) would have you listen to something a little less slanderous. You can see it here, performed by a pop band campaigning for Lukashenko; translated into English, the lyrics go something like this:

He won’t teach you evil

Father can bridle anyone

Father is stronger than the rest

He will settle conflicts

He is reliable and calm

He just throws a glance – and you see

Who is the master in the house

In the morning, day, and night…

If you feel bad

If you are ok

At Bangalore Square, the message from N.R.M. may be slightly more subtle, but the sentiments are as strong:

Had been living in the darkness.

Now the darkness for it

Is also the light….

Is having a good time and is drinking,

Is standing on its knees,

It would be good to buy dollars,

And to sell rubbles,

And then to go rather far off

We — Belarussians, together with brother Russia —

Had been looking for the roads to happiness…

We were united by neither much nor little —

By the participation in the stupid struggle…

Is waving its wing,

Is pecking the bloody food

N.R.M, My Generation, as quoted by Philip Kennicott, Rock Band Speaks to Generation of Belarussians, The Washington Post

You can hear more clips of N.R.M. songs here and here.

Belarus: More Soviet than the Russians

In Kiev, there was a lot of money … there were a lot of business people in Ukraine who were dissatisfied with the state of government there, and invested a...

This morning we were greeted with a post-game analysis of last night’s show on Belarus , courtesy of two of our guests. Dr. Marples was great. Really. The only comment I...