This show records at 2:00 pm on Tuesday, November 21st to give us a day off before Thanksgiving; you can hear it via podcast immediately, or on the radio on Wednesday, November 22nd.

Before sectarian hatred came to seem universal, Belfast and Northern Ireland showed off the pure model: white Christian Europeans looking and sounding (to us) exactly alike, despising each other as “Pape” and “Prod,” bombing, torturing and killing eachother with gusto and a most amazingly insatiable passion. The Irish version of Sunni and Shia, Hutu and Tutsi, Arab and Jew signed its name in poetry we remember, in Seamus Heaney’s code growing up (Pape) in Derry: “‘You know them by their eyes,’ and hold your tongue,” Heaney wrote of the recurrent troubles in the mid-Seventies, “And whatever you say, you say nothing.”

Of open minds as open as a trap,

Where tongues lie coiled, as under flames lie wicks,

Where half of us, as in a wooden horse

Besieged within the siege, whispering morse. 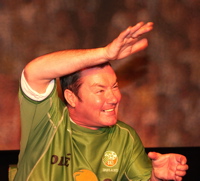 The Belfast playwright Marie Jones’ stage drama, “A Night in November,” is another classic bit of Irish alchemy. The play is a highly individualized case history of bigotry at its most banal, transformed overnight in a World Cup soccer epiphany. Kenneth McAllister is a 39-year-old welfare clerk, a social-climbing Protestant who listens to the noxious death-dealing taunts in his own family against the Republic of Ireland team on the field with Northern Ireland in Belfast in 1993. In the course of his two-hour journey on stage, the Ulsterman Kenny, a Brit once removed, has a consciousness transplant; by the end of his travails, and ours, he becomes a very nearly cleansed human being.

The Belfast actor Marty Maguire makes the show, by quick turns: shocking, profound, hilarious, virtuosic. The only actor on a nearly bare stage, Maguire plays Ken McAllister, his wife and at least 25 others: “dole” cases, his own cigarette-sucking father-in-law gagging on emphysema and venom, New York bar flies, a whole stadium section of soccer fans. Maguire grew up in Northern Ireland — in the life, so to speak; and he has come to embody the subtleties of Marie Jones’ writing in performances in Edinburgh, London, Dublin, New York and Los Angeles. We caught the sold-out show near Boston (extended through December 10) at Jimmy Tingle’s Off Broadway Theater in Davis Square, Somerville.

In the Jones-Maguire telling of a story that reflects also Baghdad and Gaza, the minds are trapped, the tongues are coiled in early youth — then cultivated for a lifetime and very rarely restored. We are going to ask Marty Maguire to “give us a taste” and expand on the instructive as well as redemptive news of “A Night in November.” How do we come to “hear” the foul codes of hierarchy and hatred in our own everyday speech? And then how do we give them up?

As we put the show together, we’re wondering what markers, physical signifiers — cigarette brand, word choice — you use to distinguish the unionists and nationalists in your lives. Several of us saw the play on Saturday and it took a second for it to be as obvious to us as it was to the world of the play that a man at a dole office with six dependents is clearly Catholic. What’s your “six dependents”? What shorthand do you use to determine class?

Missed this the first time around: turns out patsby had the same idea as Chris. She pitched the idea to us the same day Chris came in and said “I saw this great play this weekend!”