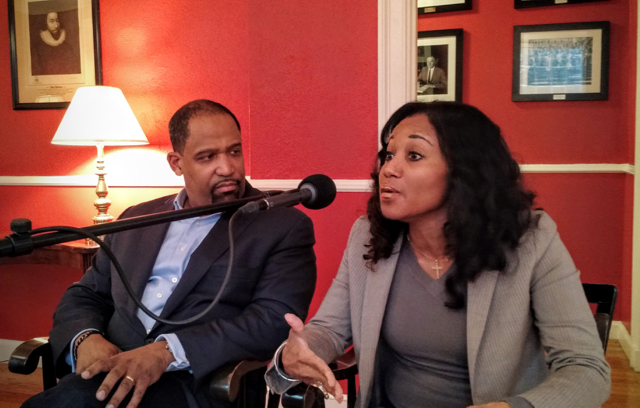 At Mizzou and Yale, is it the second civil rights movement yet?

What does the second civil rights movement look like? Is a new struggle for equality, in feelings as well as rights, afoot on American campuses?

It seemed possible this week when frustrated students toppled the president and chancellor at the University of Missouri. We’re asking how the whole thing happened, and if it’s part of a new model for racial change. Our guest Daunasia Yancey, the Boston organizer who confronted Hillary Clinton on inequality this year, hopes so. Martin Luther King wrote: “injustice anywhere is a threat to justice everywhere.” To many, the new activists at Mizzou and Yale — and, before this week, at UMich, UCLA and Arizona State — are living that lesson. They speak of pain, insecurity, and alienation in school — the stuff of Claudia Rankine’s poetry of microaggression and the polemic reporting of Ta-Nehisi Coates. Driven by recent history and the matter of black lives, the kids demand redress.

Others say the campus turn is risky. Our guest, the feisty blogger and professor Fredrik deBoer, worries that his liberal students are being illiberal in the name of sensitivity. There is a fear that big movements will start to focus on small, millennial things: Halloween costumes and misguided emails. A Yale senior screamed at her resident dean, and reasonable folks wondered “could life be so hard in the Ivy League?” Harvard students we interviewed this week say “yes.” One young man said he’s struggling to “sing the Lord’s song in a strange land.” He and hundreds of classmates gathered Wednesday to get recognition and testimony (but not much comfort) from Coates, the Atlantic writer we’re sampling in our program.

And we have two professors (pictured right), macro scholars on race and the law tasked with the micro events of student life. Ronald Sullivan and Stephanie Robinson are the first African American house masters (residential life deans) in Harvard’s long history. Many of their young charges are fed up, but Halloween passed without incident at Winthrop House.

So, tell us: What’s happening on your quad? What does the second civil rights movement feel like? And will the Ferguson spirit grow on campus or will it stall?

(Yale, above, in black and white courtesy of Philipp Arndt)