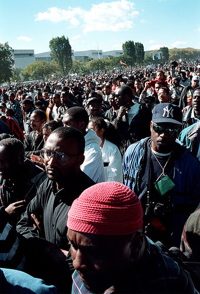 The reason why the girls do better is that, because they’re with the same sex parent, they have their mothers as role-models. … They grow up seeing a woman who is a very, very capable person. They boys say, ‘where’s the model of manhood?’ He finds it on the street.

In February the Washington Post’s Lonnae O’Neal Parker appeared on our feminism after Betty Friedan show to talk about how the “Mommy Wars” (deciding whether to pursue a career or opt out of the workforce to be a stay-at-home mom) just didn’t apply to black women in the same way that it might for many white women. It didn’t apply because black women have a completely different history of employment, property ownership rights, and educational opportunities. It didn’t apply because working black women must often help support family members who aren’t employed. But most interestingly, she said, because an estimated 40% of black boys born this year will someday end up in prison, it didn’t apply because staying home to raise healthy, well-educated, well-adjusted black men was an accomplishment in itself.

It’s a shocking figure, no? But is it more shocking than it should be, given we know how bad black men have it in America? Shouldn’t it be less shocking for precisely the same reason?

Starting last September we embarked on a weekly series about race and class in America. After a winter hiatus we’re resurrecting the series, and we want to start by talking about the specific and very scary plight of black men. We were inspired in part by this New York Times article which quotes a slate of new books and studies that all ask roughly the same set of questions: we know it’s bad, but how bad is it? And why? Why is it that more than half of all black men still do not finish high school? Or that incarceration rates are seven times higher for black men than they are for white? Why, even with the boom-town economic expansion of the 1990s, were black men basically left behind? And in the decade since the Million Man March challenged black men to take control of their own lives and empower themselves for change, has anything gotten better, or has it gotten worse? And how do you get around the uncomfortable meta-point, the famous line from W.E.B. DuBois: How does it feel to be a problem?

Author of recent New York Times op-ed, “A Poverty of the Mind”

Thanks DAM for this suggestion.

We asked our friend at the blog Angry Black Bitch (who has one of our all time favorite blog slogans: “Practicing the Fine Art of Bitchitude”) for her take on tonight’s topic. Here’s what we got:

Too often past research has neglected the impact of poverty, oppression and neglect on a person’s mental health. Personally, many of the black men in my world are clearly depressed and frustrated. Sometimes, this depression predetermines a situation. I have one friend who can talk himself out of taking a chance in 24 hours through a manic exploration of The Man, his boot and how it is forever planted on his neck.

Having said that, a lack of expectations within the black community is also a factor. We absolve bad behavior and have few, if any, consequences for mistakes. To be honest, we have moved to a level where words like ‘mistake’, ‘wrong’ and ‘poorly thought out’ simply don’t come into play.

I am anxious and concerned for my brothers. I long to come up with the quick answer, the motivational statement and the solution to what is clearly a crisis.

Internalized racism – the embracing of racist notions of our culture, low expectations and a slave mentality towards ambition.

Misogyny – the embracing of outdated roles of women, the blaming of black female empowerment for the current dysfunction in black families and the insulting disregard of black female achievement in the same time of the great black male crisis is rampant in some…not all…of these studies.

And then we have the brothers, the crisis, the unclear goals and the overwhelming apathy of our patient.

And, to reference Brother Martin Luther King, Where do we go from here?

Surplus People in the Global Economy

Friend of Open Source Marcellus Andrews, who was on one of our first race and class shows back in September, sent us this dispatch today in response to the slate...

The Lessons of Katrina

24 MB MP3 It’s been about a week since the waters of Lake Pontchartrain inundated the city. The levees have been patched up and the draining of New Orleans has begun....