Reid, a military observer for the United Nations Mission in Liberia, had front-row seats for today’s inauguration of President Ellen Johnson-Sirleaf: 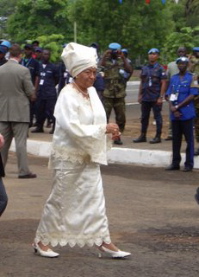 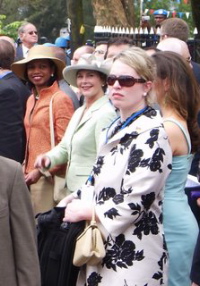 The atmosphere in the streets today was more than jovial. The majority of the streets in town were shut down, and security was visible everywhere. Half the population of Monrovia lined the main street, and they danced and waved shouted at us for our two mile walk to the capital. Much of the crowd recognized us as Americans and would shout “Thank you for coming!” and “Thank you, Americans” or “It’s is a good day!” to which we would shout our congratulations.

Reid writes that Condoleezza Rice — of the Americans present — received the biggest cheer from the crowd. Later, President Johnson-Sirleaf’s hour-long speech continued on the themes that she used during her campaign:

Ellen’s speech was good, talking at length about the desperate poverty in the country and the need of regular jobs for the heads of most households. But, she riled the crowd up the most when she spoke, at length, on the need to eliminate corruption in the government. After claiming that her words were not just the feeble promises of another politician, she announced a new policy that every single member of her administration must declare all their financial assets publicly, and this was the biggest applause line of the day. 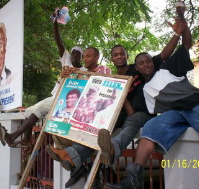 The Internet is unavailable to nearly all Liberians; all of the posts and photographs we found of Liberia came from aid workers and UN employees. Scott Harrison is the volunteer photojournalist on the Mercy Ship Anastasis, an aid and missionary vessel on the West African coast. Scott witnessed and photographed the elections in November.

Liberia treads gingerly towards a future of peace and promise. The pot-holed streets of Monrovia host voters who speak about hope yet seem doubtful. The Ak-47’s on the more than 15,000 United Nations troops swing at attention as tanks roll visibly and loudly down Broad Street. Sirens wail and armored convoys are a dime a dozen. And, as I’m writing this, it seems Liberians have elected Africa’s first woman president. Ever.

Ants_in_your_pants, Our Man in Monrovia, has great photos from the elections.

Luigi Pralangga, My African Journal, is a UN worker from the Philippines.

Friend-of-Open-Source Andy Carvin made a video at a Liberian refugee camp in Ghana.