A week ago Otis Air Force Base, on Cape Cod, was on the short list for shutdown. Today it is a makeshift community of more than 200 evacuees from New Orleans. Now that the victims of Katrina are dry and fed they are eager to make the transition from itinerants to residents. The question is how?

Cape Cod is famously known as a tony resort area but for those who live there year round it is anything but. Many on the Cape lead hardscrabble lives. Jobs are in short supply and the housing scenario isn’t much better. What quality of life lay ahead for these newcomers? How is the Cape preparing to extend its already tapped resources? In this hour we want to understand the plight of Katrina victims through the lens of their new hometown. In talking with Cape Cod community leaders, journalists, and residents we hope to get a broader understanding of how the rest of the US is absorbing the thousands of people displaced by Katrina. Ideally this show will also provide a context in which we can talk about race, poverty, local politics — all of the issues that have surfaced as the waters have receded.

Allison has posted on our site , in regards to housing Katrina victims, “Are others prepared for how long-term the need is? And how much people need the feeling of stability after being dislodged so abruptly?” These are the kinds of questions we want to ask, and answer, on this show.

Evan askes if we’ll hear a few stories from people who are there. We are collecting tape at Camp Edwards so that you can hear the evacuees’ stories first hand.

Reverend Jeffrey Brown has been appointed by Govenor Mitt Romney to be the “Mayor” of Camp Edwards. He is pastor has of Union Baptist Church in Cambridge and one of the founders of The Boston Ten Point Coalition. 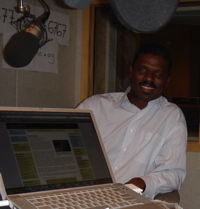 I was at Camp Edwards when the plane touched down. My wife was with me and when we entered the plane we saw 100, very tired, people. Some of them were still in wet clothes. Many of them were scared and apprehensive. Many of them had never left their neighborhoods, they have always been around black folks. When they were on the plane they had no idea that they were headed to Massachesetts. Once they found out they were afraid that Massachusetts was nothing but white people. all of that dissipated once they saw me and my wife.

There are some folks who are struggling with post traumatic stress disorder, but many of them are thinking about taking that next step. What surprises me is their resilency and self-sufficiency. Already they are tiring of the handouts.

Gonsalves is a staff writer for the Cape Cod Times and a syndicated columnist.

People are starting to say “We are dry, we are fed, we are living on a military base.” They are working people, they are not use to getting handouts, they want to work and find permanent housing.

The evacuees fall into three groups:

1)Folks who have family and are looking to go there

I worry about their quality of life longterm. There is not a thriving southern culture on the Cape. The black communities are very small. When I talk to these people, who are so resilient and surprisingly upbeat, I feel for them because I’m thinking, ‘It’s not going to always be like this.’ But they surprise me because the overriding sentiment is, ‘after what we’ve just been through, we can handle anything. We’ve been black in the south, we can deal with a couple of cranky cape codders’