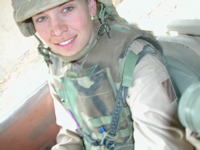 In a Humvee on the road to Baghdad from Kuwait, 2003

Meet Toby Johnson, one of the guests for our Women in War show. After graduating from West Point, Toby became an Army Apache helicopter pilot (in what was probably one of the first all-female crews). During her deployment to Kuwait and then Iraq in 2003, she worked as a battalion adjutant, responsible for personnel administration. She’s now a former Captain and a student at Harvard Business School. These photos she sent us give a glimpse of her life as a woman in the military.

Toby forming the battalion in Kuwait 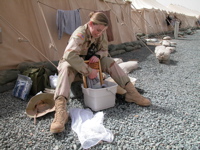 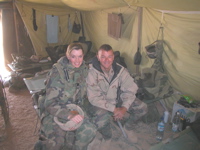 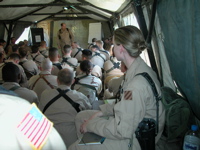 In the company of men at a pilot brief in Kuwait

In flight school in Enterprise, AL, next to an Apache

Click to Listen to the Show (24 MB MP3) [Thanks to hurley and valkyrie607 for pitching this idea.] In Iraq [Mary Godwin / Flickr] American women are serving, getting injured, and dying in...

Soldiers and Families: Life in the 150th

…they had gone on a mission and he was playing peek-a-boo with a child standing behind a tree that looked to be about two. And then he realized that the...