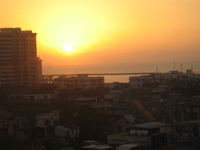 President Hu Jintao of China is visiting the U.S. this week. It’s not an official state visit — not like Manmohan Singh was granted last year — but more of a “working visit.” And this is more than political pageantry. It means, for example, that President Hu will be having dinner with Bill Gates… but not George Bush. And it means that the Sino-Indo-American geo-political chess match — which is perhaps more like Canadian doubles, in which the partners switch around a bit — is getting more interesting all the time.

There are plenty of short-term questions surrounding the trip: Will China budge on intellectual property, to Gates’s satisfaction? Will they revalue the yuan? (And would an abrupt revaluation actually help the U.S.?)

But the visit — on the heels of Bush’s whirlwind trip of his own to India — brings to the fore some deeper questions. After a two decade headstart, is the tide moving away from East Asia and toward South Asia? Is India ready to challenge China for primacy in the hyper-developing world? And who is the business community betting on? The venture capital firms? The outsourcing manufacturers?

In short, who’s the power of the new century and who holds the better hand: China, with her strong central command and claims of “stability,” or India, with her cacophonous, messy, multi-ethnic democracy?

Author, The Making of the Chinese Industrial Workplace: State, Revolution, and Labor Management

Got an email from reidmix, who took the picture of Mumbai we see above. He was on the 10th floor of the Fariyas Hotel, looking west across the Arabian Sea. He even sent us the hotel’s exact latitude and longitude, so we could find it on Google maps.