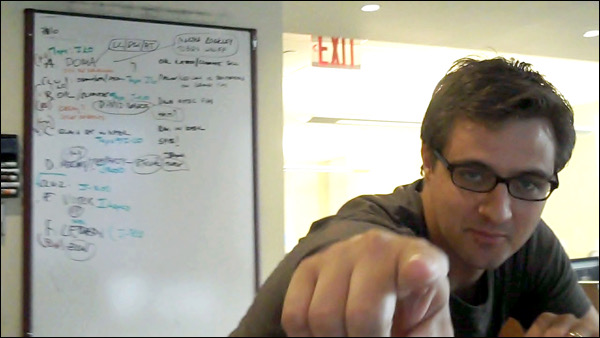 Chris Hayes has done a 180 on Groucho Marx, who said he wouldn’t join a club that would have him as a member. Chris Hayes has rushed the media elite that he knows is sinking. He won’t save it alone, of course, but he’s a temptation or maybe a model for wary 30-somethings like himself, for people who’ve stopped listening to anyone in authority. A great deal of his book Twilight of the Elites and of our conversation is fixed on his own mixed emotions about being the “it” boy in a dubious game and a bad time — in the “fail decade,” as he calls the opening era of his adulthood. He seems to be writing and living out a warning to himself.

The cover story is that talk TV has a rising star in Chris Hayes, cast as Rachel Maddow’s kid brother, as learned and lively as she is. In a pretty sclerotic media scene full of people who got suckerered into selling the Iraq War, he’s the bright-eyed millenial kid from Brown (2001, philosophy major) and The Nation magazine who’s inspected the emperor’s new clothes and keeps talking about them. He harps on inequality as the story in 2012, plus unimaginable debt and an awful losing streak on the American scorecard. He says it all without wailing or gnashing his teeth and everybody thinks he’s a nice, cool guy. The multitudinous fans of “Up with Chris Hayes” on MSNBC are encouraged to call themselves “Uppers.” The back story in Twilight is his judgment that the “meritocracy” that selects high-testing hard-working overachievers like him (like me in another generation) has been a big part of undoing the American Dream in the last 30 years or so. His “iron law of meritocracy” is that it becomes a smug elite that pulls up the ladder behind it, is socially isolated, prone to failure and inevitably corrupt. Not to mention that it becomes “a pathological way to live.”

This is increasingly a social set-up that’s fated to produce crisis, catastrophe, dysfunction, poor decision-making — and a lot of unhappy people. This is a model of ceaseless competition and what I call “fractal inequality,” in which there’s no top. The ladder always ascends ever upward, as if you’re in some M. C. Escher drawing that you climb rung by rung, only to see a new one come into view… It’s the way finance works, and finance dominates the American elite.

There’s a model of scarcity that’s fundamental to the conception of society as a meritocracy, which is this funnel that everything goes through. The idea is that not everybody can get into it: whether it’s schooling, jobs at the top firms, clerkships with the best judges… The model of scarcity produces anxiety and competition; and the whole way we think about where everything is headed is this model that there’s some small set of happy lives and fulfilling jobs. Whereas the social model should be: everybody’s who’s willing to work can have a fulfilling job and a happy life… That was the model of the auto workers’ treaty with Detroit. The vision was deeper than good wages. It was about who deserved a good life — and the idea that working people deserved a good life. We just don’t have that anymore. The meritocratic model is that you deserve a good life if you meet these elite criteria, if you find your way through all these funnels.

Might Jon Stewart have smacked this guy — at least rolled his eyes — for all the hi-falutin’ stuff about the “dominant meritocratic ethos”? I wondered as I left his office: is Chris Hayes a little hung-up on himself and the vertigo of his own success? A little too smart about the cult of smartness at the top of the heap? Is he speaking truth to power, or talking his way through it? And: is it still okay to like this kid a lot for his “kind of naive earnestness”? For naming the four corners of his drive as “frustration, betrayal, disorientation and curiosity”? For his readiness to say, yes, what a “bizarre interregnum” it is we’re living through? Comments please.