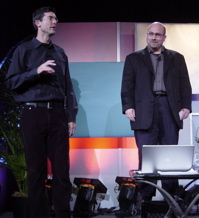 Once, at an Internet conference, I was standing next to Craig of Craigslist and I thanked him for my wonderful apartment. He was as gracious as could be, but you could see it pained him a little; clearly he spends most of his time in public fielding strangers who want to thank him for their apartments.

Some things you find at Craigslist are obvious: dates, skis, cars. What fascinates us is the rest of it, all of those things you might need that can’t reasonably be described anywhere else. A woman in Boston found a pile of clothing that looked like it might have been thrown out a window in anger; on Craigslist she located the owner of the pile.

Its flexibility makes Craigslist work; you can ask for anything, offer anything. Like Flickr or Wikipedia, it’s a kind of shadow web, re-creating in a new — better? — way to find information. And things. And people.

What’s your Craigslist story? I found my apartment there, but that doesn’t count; did Craigslist change your life?

I believe it’s Craigslist, with its bewildering main page array of activities, jobs, real estate, stuff for sale, and personals, that makes the best metaphor for America’s current state of disunion. You have dog-clubs and tennis-clubs; sperm donors wanted, and sperm donors offering. You see want ads for potential spouses and some for fiddlers (and some that are both at once!).

So after hearing Amardeep Singh on our Blogs of the Union show, we got to thinking about Craigslist nation: are communities of interest replacing the Elks Club?

So we figured we’d finally schedule this show; Craig will be in a studio with us for an hour. We still want to know what your Craigslist story is, but we also want to know about people and relationships, not just the things you buy. Did your sports team start on Craigslist? Your love life?

Craigslist and Nola.com: Information as News

Amitav Ghosh is a novelist, a journalist, a star among postcolonial writers. He’s a child of post-Independence India who sees all too clearly the dangers of empire — both in...