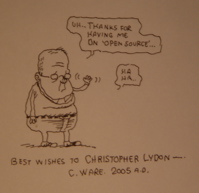 We made comic-book artist Chris Ware sing for his supper when he came to the studio for his show The Dark Pages.

Never was a humble footnote happier than I am to be attached to the record of a cultural revolution — and in my case, to the “word of the year,” which turns out to be: podcast.

In the podcast transformation of broadcasting, Dave Winer must get the inventor’s credit, and something more for his generosity with the the magic of an idea.

Dave knew better what we were doing than I did three years ago. When he arrived as a fellow at the Berkman Center at Harvard Law School at the start of 2003, he said to me, in effect: “I know syndication. You know sound. Let’s get busy.” He had the greased lightning of RSS. I had a radio history and mp3 files of mini-disc interviews.

“You could interview me,” said never-bashful Dave, “and I could help you circulate it.” And: Shazzamm! On July 9, 2003 we recorded a solid 20-minute conversation about blogging, and I launched it: the first podcast, which still makes pretty good listening.

Dave’s friend Adam Curry, living in Belgium, received it in his iPod and said he quickly got addicted to the long series of conversations that I learned to post with another genius of invention, Bob Doyle at skyBuilders.com.

For the site Christopher Lydon Interviews Dave Winer gave me a handsome custom design on his Manila software. Audio-on-a-blog was the new trick we were advertising, along with an unconventional range of interview subjects: poets and prophets including Glen Reynolds, Robert Fisk, Jay Rosen, the late Edward Said,

George Lakoff, among the scores.

There are by now many good tellings of this story of The First Podcast and the next few. As podcasting took off, Bart Eisenberg wrote a “sidebar” that caught me in an expansive conversation on the early vision of where we were going. And now Dan Bricklin has put it all in plausible big-picture context at Ten Top Sources.

It is no small joy to find oneself swimming, however unexpectedly, and surviving in a sweeping, thunderous, complex wave of innovation. But let’s also say this for ourselves: we had a notion!

We knew that a grand liberation of discourse was coming with the tools and tricks that could make our conversations instantly global — that could time-shift and archive them and also distribute them free. Yes, free like lunch as well as free like speech. We knew we could add to the blogosphere what it really didn’t have: the sound of “that fabulous instrument,” as Studs Terkel calls it, “vox humana.”

As I noted on that first podcast with Dave Winer, we knew media world was dying and being reborn under our fingers. The new blog scene, I was feeling (two and a half years back):

… has the crackle and pop that traditional media conspicuously do not these days.  It’s cheap and easy of entry.  It’s politically free, wildly opinionated but also information-rich.  It’s literary, it’s musical, it’s poetic.  It has the full range of human curiosity and passion about it.  A lot of it is funny, feminist, futurist, cosmopolitan, confident and all those other good buzzy things like edgy, enthusiastic, highly energized.  The adrenal elite is here.  So now what?

“So now what” is this toddling hybrid — this web community with a radio voice, this 7-month-old descendant of Marconi and Berners-Lee both, this 24 x 7 conversation about Iraq and eternity, about King Lear and the Dresden Dolls — that we were the first to call Open Source.

What we’ve learned since the first Open Source broadcast on Memorial Day, 2005 is, in one phrase, to go with our hunches. Or as the immortal Emerson told us all along, “Trust thyself! Every heart vibrates to that iron string.”

Among other confirmations, the key to all the rest is that this local-global intersection of broadcast radio and the Web is a thoroughly real place. And like a new subway station connecting invisible transit lines underground, the meeting point generates for all to see a blooming architecture of original activity over and around the various streams of traffic.

We’ve proven to ourselves that poets could hear the techies and techies could hear poets in the same sustained conversation; that we could range not just from Dvorak to Duke Ellington, which was easy, but from cosmology to cookbooks; and also that passionate conversations were bubbling up — around, say, the nature of morality and the tribulations of American Christianity, for example — in ways we hadn’t anticipated at all.

We see more clearly every week how a community of listeners and writers can produce a radio show. And yes, believe me, we read and argue over pretty much every suggestion.

We note the emergence of guardians and scorekeepers of the conversation on the site–with names like Potter, Allison and Nother, among them–who have volunteered themselves as hearth keepers and trustees of the discourse.

We notice, of course, that the website conversations keep going and going… Three days after E. O. Wilson spoke on the air about creation and science, a witty stream of inquiry and argument is still flowing and growing.

We’ve engaged my shining prince of the old journalism, John F. Burns of the New York Times, on the war in Iraq. But we’ve also heard with our own ears an entirely new journalism being born, and a new cast of shining princes like John Donley and Patrick Belton. The very best of the old media model was to send a cosmopolitan guy with brains, big balls, New York credentials and blazing good prose to bring the story back from the far ends of the earth: John Burns, in short. When Katrina clobbered New Orleans and put the Times-Picayune presses underwater, John Donley editing the paper’s website, nola.com, presided over the definitive Katrina coverage in the messaging among survivors. And when cars started burning all over Paris this fall, we got a satisfying round-up — a preview of “all bloggers all the time” — from brilliant amateurs, led by an Irish graduate student from Oxford, Patrick Belton, who just happened to be on the spot in Paris and made us feel we were there.

We’ve just begun to confirm the validity of the “Charlie Nesson feedback loop,” named for the Harvard law professor and Berkman Center founder who urged me years ago to combine the cheapest, most penetrating, most universal tool in the media shed — radio, outbound — with the most inclusive, most democratic, most global aggregating tool we’ve ever imagined — the Internet, inbound.

We know that sound and real voices add immeasurably to the value of Web text. Emerson again, in a couplet: “The music that can deepest reach/ And cure all ill is cordial speech.”

We discovered in a completely insane little fire-fight over the Open Source name of our program and website that the blogosphere is not a jungle at all. There is character and conscience out there and fellow feeling that came instantly and effectively alive just before Thanksgiving when we were almost robbed. Jeff Jarvis led the righteous charge to protect justice, fair play and us. And we are eternally grateful to him and the whole community.

We’ve learned that with the right allies we can own our work and manage a happily struggling little media business ourselves.

I love the line from someone in the old Baltimore Colts organization: “I’ve always said the purest definition of leadership was watching Johnny Unitas get off the team bus.”

Well, my version would be: watching Mary McGrath charge into the office every morning. For more than a decade now Mary and I have been making radio together–with many, many differences of approach but never yet a serious personal argument. She is a perfect gift, from someplace far above. Our gift together is the spark of colleague-ship with the next generation. In this Open Source circle: David Miller, a mind and man of true elegance. Katherine Bidwell, multi-dimensionally curious, sound and steady. Brendan Greeley, antic and ingenious, an enviable writer. Chelsea Merz, impeccably tasty with every sort of sound. And Robin Amer, the hardest charger on our team. It’s a privilege and an understatement to read the credits each time. Thank you, Jake Shapiro and Jay Allison, for sending your best our way!

Open Source as a general conversation has barely begun.

I feel desperate sometimes to hear a lot more poetry in the mix. In celebration of Leaves of Grass on its 150th birthday, we heard a pair of brilliant Whitman readers, Stanley Kunitz and Studs Terkel. Average age: ninety-seven-and-a-half! We long to hear more and younger, starting with our neighbor, the US poet laureate Louise Gluck and her celebrated proteges.

In the 250th birthday year of Wolfgang Amadeus Mozart, we want to hear Russell Sherman and Craig Smith on the Mozart piano concertos. And we want to do more contemporary live music, after the examples of Amanda Palmer and Donal Fox.

We want to pull on the thread of climate change, and track the course of the “life sciences” that are booming all around us at MIT and Harvard.

Especially after the Tunis summit on the Information Society, we want to be more actively, unmistakably global in our conversation. We want to capture more of the spirit of the overwhelmingly marvelous Global Voices Online. We want to visit India, and China–on the bet that these times will be remembered primarily for the Rise of Asia.

We want to live up to that ridiculously flattering comment on the page the other day from “nother,” even before our show on Andalucia, the medieval model of zesty pluralism. “All of you at Radio Open Source are like my friends in that Al-Andalus pub who I can rap with about music, politics and religion. And the pub you guys run has the best discourse and drink around.”

Notice in the Comment thread that The Little Yellow Bird immediately chirped in some distress: “Yeah! Radio Al-Andalus! (Oops — that sounds like a news agency Bush would fry from the sky…)”

These are still strange and scary times in America, but let’s plan on getting through them somehow. The most provocative end-of-the-year comment I’ve read is Harold Bloom‘s in The Guardian. Quoting Huey Long: “Of course we will have fascism in America but we will call it democracy!”

Our ambition is to keep building this Internet extension on Ralph Waldo Emerson’s plan, with Margaret Fuller, for the transcendentalists’ magazine, The Dial, in 1840.

Emerson embraced the “good fanatics,” as he said, in a conversation about everything, marking “the progress of a revolution” against the cant, habit and conventions of his time.

We say of Open Source what Emerson said of his Dial: “Let it be one cheerful rational voice amidst the din of mourners and polemics.” With the Internet and your strong voices, let us keep building an all-curious compendium of “worthy aims and pure pleasures” for our own embattled era.

And yes, not least: A Merry Christmas and Happy New Year all around!