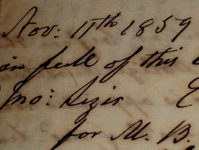 A recent article in the Washington Post forecast the end of cursive. What was once essential to commerce, diplomacy, and personal intercourse, the Post suggested, now seems as quaint as a rotary telephone.

The article sparked debate throughout the blogosphere. Many bloggers bemoan the demise of personal penmanship as the end of a more dignified era. Others say “good riddance” to handwriting and welcome the technological advances that are rendering it obsolete.

How great is this loss? Substantial, say some. This camp asserts that writing in script benefits both writer and recipient alike. Palmer Method proponents contend that connecting one letter fluidly to another strengthens neural pathways in a way that striking a keyboard, or even penning block letters, doesn’t. They also cite the benefits to the reader, calligraphy on heavy vellum being a superior sensory experience to that of the Evite.

On the other side there are those whose early educations put the curse in cursive. To many adults of a certain age, the charm of elegant handwriting wasn’t worth the bloody knuckles acquired in learning the craft. And even those too young to have been subjected to the regimen of slants and ovals welcome the scalable electronic font as a quick ticket to legibility and email and text messaging as the tools of commerce and intimacy. Who needs handwriting, they ask. It’s time consuming, labor-intensive, and ecologically unsustainable.

Would you rally to keep cursive off the endangered species list? When you jot something down do you write in script or do you print? Would you miss getting those handwritten notes from Great Uncle Aleicester or would an email from him be equally valuable? When was the last time you sent someone a handwritten note, or received one?

If you can guess whose handwriting this is we’ll send you an Open Source T-shirt. All that is required of you is that you listen to the show for the answer. Post your answer in our comment thread. 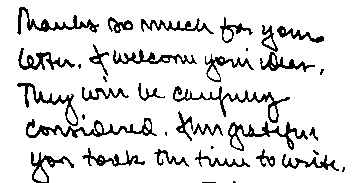 Andre Cataluna won this years Zaner-Bloser Handwriting Contest. He’s an 8th grader attendning Saint Philomena. He llives in Carson, CA. We’ll hear from him during the broadcast. Check out his winning entry: 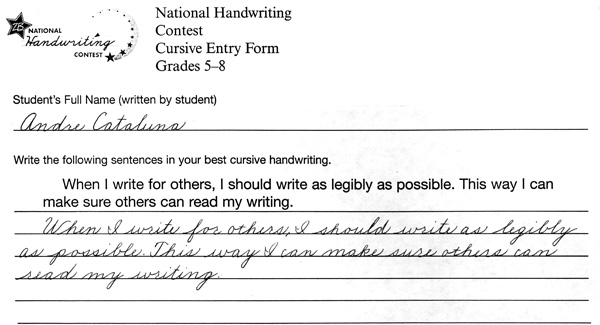 Author, The art of the Handwritten Note and Learn Calligraphy

Margaret Webb Pressler The Handwriting Is on the Wall, The Washington Post, October 11, 2006: “When handwritten essays were introduced on the SAT exams for the class of 2006, just 15 percent of the almost 1.5 million students wrote their answers in cursive. The rest? They printed. Block letters.”

(via Potter) Stuart JeffriesThe Death of Handwriting, The Guardian, February 14, 2006: “(The less prosaic version is to be found in Plato’s Phaedrus, where Socrates tells the story of a god who offers an Egyptian king a miraculous aid to frail human memory. The king is sceptical, as is Socrates who warns that writing will replace memory and argues that the truth that lives in the human soul will be dissolved in its translation into ambiguous inscription. (Ironically, as Jacques Derrida pointed out, we only know of Socrates’ sceptical thoughts about writing because Plato wrote them down.)”

Eric Zorn Cursive, Foiled Again., Change of Subject, hosted by The Chicago Tribune October 11, 2006: “Still, cursive itself strikes me as the slide rule of the humanities — a relic whose passage into history deserves a shrug, not a tear.”

Is the Art of Handwriting Fading in Classrooms?, OregonLive.com, October 11, 2006: “‘On any given day if we have to choose between teaching handwriting or teaching children to read, something is going to be left out.'”

Editorial, Go With the Flow: Cursive is dying, but communication is alive, The Dallas Morning News, October 14, 2006: “We are pretty certain that it’s less important how succeeding generations communicate than that they hone communications skills.”

Emilie van Outeren Doctors Turn to Penmanship Courses the Cure Bad Handwriting, Columbia News Service, April 4, 2006: “‘An average 8-year-old gets lessons from someone who had their own training at that age,’ said Kate Gladstone, a handwriting instructor from Albany, N.Y., who also teaches doctors. ‘Imagine we did the same with arithmetic.’ She tells doctors their illegible scrawls are not their fault. ‘Their writing skills don’t hold up at the speed doctors now have to write.'”

Lydia Joyce The Problems of Not Teaching Handwriting, LydiaJoyce.com, August 10, 2006: “In more and more schools today, writing is taught…but handwriting isn’t. I’ve talked to a number of people my age, and many had the same experience I have: a K or 1st grade teacher tells you how to shape your letters once, and after that, you just get practice worksheets thrown at you, one every day of the week. In third grade, when you “learn” cursive, the process is repeated. If your handwriting is bad (like mine!), they simply write on your paper that you should “try to be neater”. Meanwhile, since you WERE trying, nothing is solved.”

Ezra Klein Cursive, Ezra Klein, October 11, 2006: “And while some cognitive scientists are arguing that kids who write in cursive show increased aptitude for long, complex essays, I’d like to see some studies (which there may well be — I just haven’t seen any) that disaggregate script from other factors like race, income, and ability that make a kid more likely to learn and write in cursive. Correlation, causation, and all that.”

Jason Cox Die, Cursive, Die, Unfettered Blather, October 11, 2006: “While it might actually be shame to lose this older form of handwriting, it serves no functional purpose in the modern world. You could argue that it is an “artform”, but there is other art I am far more interested in.”

Handwriting has always been in a state of change. Just the way that movies did not kill live theater, all the text messaging and e-mail is not going to kill handwriting; it’ll just reconfigure it. Handwriting is satisfying to people as a way to express themselves. They pick better words.

French companies use graphologists (people who assess character through handwriting) to evaluate managers, people in the middle ranks, and the upper ranks of the company. They do this as form of screening, in order to find out what to expect of the person, whether they’re going to meet psychological requirements of the job they’re applying for. Also, the secret services; Mossad, CIA, the British and Russian Secret Service use handwriting analysts to evaluate spies. Their capacity to deal with tension and stress. … The fact that people write gives a good insight into a person’s personality, their possibilites. It doesn’t tell everything about a person, but it does tell a great deal.

When people improve their handwriting, it’s a virtuous circle- they start writing more. That’s one of the things that I think may be the death of cursive; if you don’t use it, it gets worse and then you don’t use it more, and it looks even worse.

A graphic writer sees in handwriting two different things… you try to see the communication value, not just in what the words are, but in what the tool conveys. It’s just another tool, like typography, or photography, to convey a message.

Put down that ball-point. Pick up a fountain pen. Pad your writing sheet with two pads of paper. Sit up straight, warm up, and write. 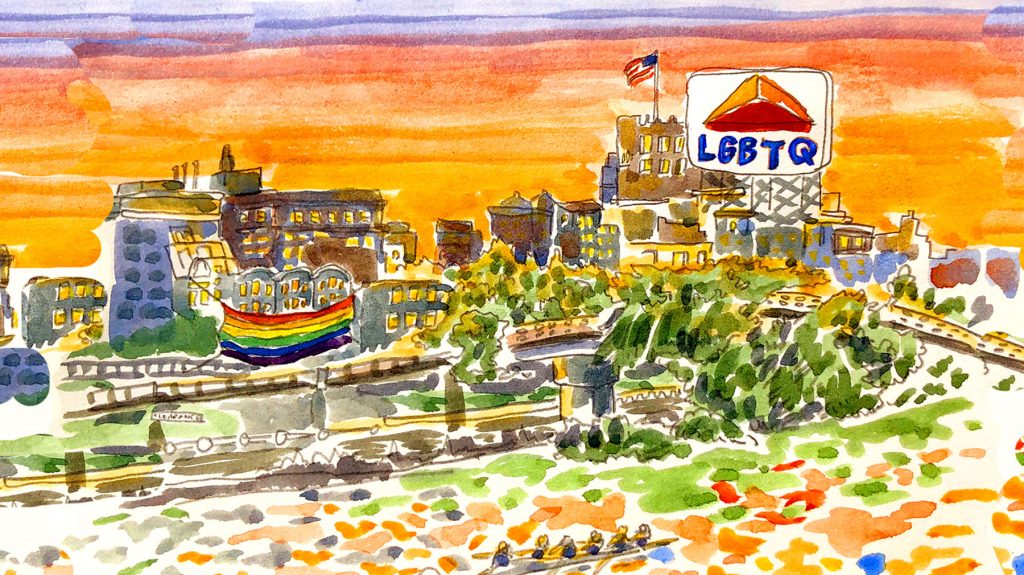 The Stonewall Uprising, fifty years ago, was chapter one in modern LGBTQ history. It was rough and ready in New York.  It was sexy and often celebratory in the San...