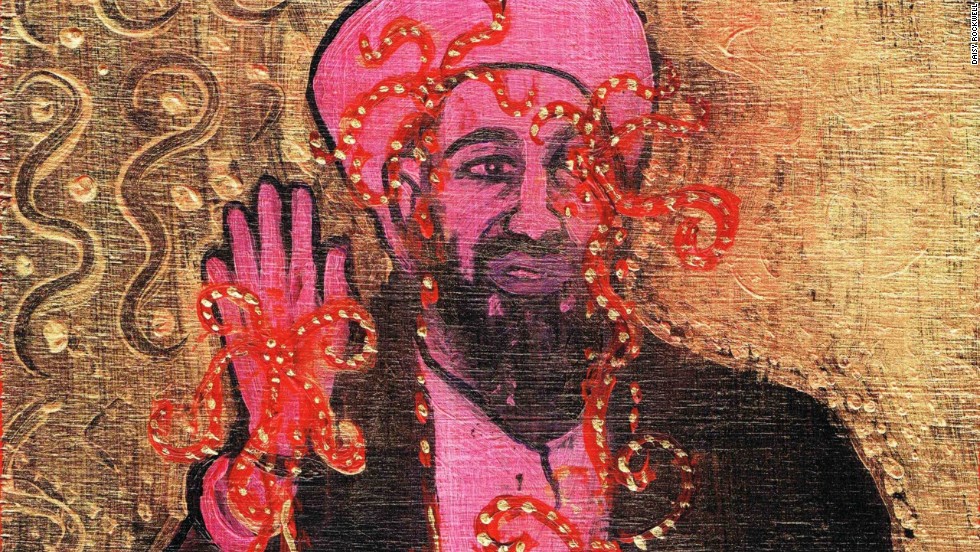 Daisy Rockwell and the Iconography of Terror

Daisy Rockwell and the Iconography of Terror Daisy Rockwell is making sport with the icons of terror, rattling the cage of images we’re in. She’s a painter who tweets — who’s becoming famous and controversial for her artful irreverence online and her written commentary in The Little Book of Terror. In her studio in Lebanon, New Hampshire, I’m looking and listening and feeling, finally — Bravo! Shame on us if we can’t take the joke.

Daisy Rockwell is a portraitist whose subjects are dead, generally remembered for mug-shot images. One of her takes on Saddam Hussein is a painter’s improvisation on a news photo of the late Iraqi dictator in the hands of American dentists. “He wasn’t actually wearing that clownish nightgown; I just put that in there. But the rest of it is truthful,” she says, reconsidering “a masterful piece of propaganda” in the original that said: we’re giving him the best dental care in the world! with the coded message that we’re torturing him. He’s getting a root canal, she supposes, “with a little too little anesthesia.”

Her painting of Osama Bin Laden’s death mask draws on her fascination with the gruesome beauty of medieval Italian paintings — of crucifixions and beheadings. “I was interested in the idea that pictures of people in death are seen differently depending on who’s looking: to some people it might be triumphant blood lust, to others it’s a scene of martyrdom.” Daisy Rockwell’s last glimpse of OBL suggests a Russian icon — if not of a saint, perhaps of a wan old man waving a helpless goodbye at a killer force of US Navy Seals who will riddle him with bullets and dump him in the sea. It’s a commentary on overkill.

For many Americans it has taken the horror story of Army Sergeant Robert Bales in Afghanistan last month to focus the point that we ask such different questions about “our” killing sprees and “theirs.” When one of our own (“Our Bobby” back in hometown Ohio) runs amok and wastes 16 unarmed Afghan villagers, our serious media show us his high-school yearbook and query whether a good soldier was unhinged by drink or grief or too many tours of duty, or “just snapped.” A raggedy-bearded Muslim terrorist, or suspect, can be classified by his picture alone as a religious maniac, a hater, a personification of evil. Daisy Rockwell’s modest project is to apply concentrated curiosity, imagination and a certain bleak humor to every face she studies. “I look as hard as I can at somebody. I have to get to know them. My research findings are the painting. What you see is what I got out of it.”

In the sometimes fierce reactions to her work, it’s is part of the story that Daisy inherited both her name and a gift for iconic imagery from her grandfather. Norman Rockwell is remembered for enshrining mid-century American contentment and small-town goodness in the brilliant anecdotes he painted on the covers of the Saturday Evening Post. Daisy is dug in against the grain of a different era, maybe a different country. Looking at her story-telling brushwork, I feel both continuity and defiance. But then Daisy suggests with a laugh that we knew all along that Norman Rockwell — the man his analyst Erik Erikson said “painted his happiness, but did not live it” — was not quite as simple as the stories he told.

There’s more continuity than even I would originally have thought. I paint portraits. I’m interested in the Zeitgeist — that kind of thing… Norman Rockwell is hugely symbolic in American culture. His name is an adjective. People say: ‘oh, they have such a Norman Rockwell family.’ In fact I was in the locker room of the gym shortly after Christmas and I heard a woman say: ‘Every year I invite my family over the holidays and I expect Norman Rockwell’s family. But instead they come.’ And then she said on second thought as she walked away, ‘but then I expect his family was just as bad.’ … I’m not being a disloyal grandchild by painting terrorists. I’m just looking at the imagery we’re being presented and questioning it.