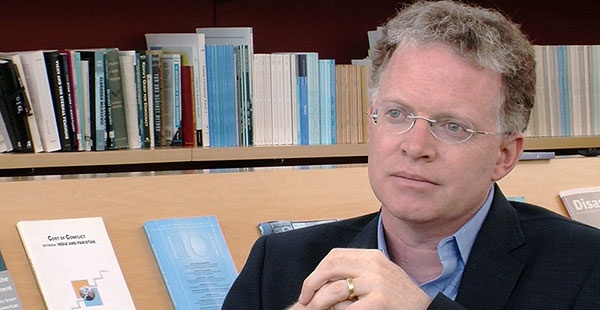 What's the moral of one reporter's kidnapping? What can Taliban captivity do to a man’s judgment, even to his soul? It made David Rohde root for the CIA’s drone missiles buzzing on the horizon, even when his captors assured him the drones were hunting for them and him, and were going to take his life with theirs:

DR: At first you’re sort of afraid because you don’t know when the strike’s going to happen. There’s no warning. The missile comes down faster than the speed of sound, so you won’t hear the missile that kills you. After a while you sort of get used to them and you don’t pay as much attention to them. But it’s a devastating weapon, and you have no idea when a strike will come. It sort of haunts you.

CL: But what was your fundamental response to the sight and sound of these things in the sky? Was it, “Whew, help is on the way,” or,  “Holy shit, this could take me out too” ?

DR: It changed with time and as my view of my captors changed. I want to be honest: I came to just despise them. I hated them. I hated them for what they were doing to my family. I hated them for the fact that they were essentially making my wife and my parents and my siblings feel like they were just cheap people, and if they could somehow just come up with the millions of dollars they wanted, that my family could save my life.  Kidnapping’s really an incredibly personal crime.  As time went by, if drones were killing Taliban it frankly made me happy. I saw them [my captors] as hypocritical criminals who were doing horrible things to my family. We tried to escape because we were basically ready to die. And we wanted them to get nothing. We wanted our families to not have to suffer like this, and we just completely despised them. So my view of the drones changed over time…

New York Times reporter David Rohde was a prisoner for seven months in 2008 and 2009 of the Haqqani network in the Taliban-run Tribal Areas of Pakistan. This is the same Haqqani network that a generation ago (pumped with Saudi money, Wahhabi theology, American Stinger missiles and CIA generalship) led the charge of the mujahedeen against the Soviet occupation of Afghanistan. The late Texas Congressman Charlie Wilson (as in Charlie Wilson’s War) pronounced the Haqqani patriarch, Jalaluddin, “goodness personified.” What should it tell us that a generation later, the Haqqani sons, Badruddin and Sirajuddin, are the point of the Taliban lance against U. S. forces in the region and both seem to have enjoyed overlordship of David Rohde’s kidnapping ordeal. In David’s account with his wife Kristen Mulvihill, A Rope and a Prayer, and in many other versions, I take the large arc of the story to be about the killer mix of fanaticism and firepower that came back to bite us on 9.11 and ever since, and how it is still tearing up the home grounds where the US helped plant the virus thirty years ago. David Rohde knows the details of that story — of our “Frankenstein’s monster,” as he puts it — far better than I do. And still I have to say his thematic question in this book strikes me as stunningly wrong. First with smoke in his nose in Lower Manhattan in September, 2001 and on to the last strokes of this book, he is asking himself “how can religious extremism be contained?” He thinks those drones might actually be part of the answer.

I am presuming in this conversation not just to differ on the drones, but to suggest he “buried the lede” of his own story. He lets me get away with it, perhaps because I’ve watched his work with affection, often with awe, since he interned as a Brown undergraduate with our Ten O’Clock News on WGBH, public television in Boston.

It was clear from last night’s show that Ahmed Rashid, David Rohde, and Charlie Sennott — talented and curious reporters all — took away much the same message from their...

If, as guesstimated, Osama Bin Laden spent half a million dollars to recruit, feed and train the perpetrators of 911, and if the US has spent or committed something like...