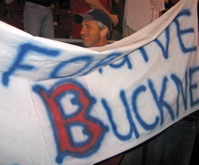 Everything in this office comes with a Red Sox analogy, and today we’re looking at the Democrats the way Red Sox nation looks at the All-Star break. Boston may be in first place. They may be five games up in first place. They may look great, they may be hitting well and there may be five good Yankees on injured reserve and yet we still can’t shake the feeling — the conviction borne of experience — that somehow, some way, before the end of September, the Sox will find a way to screw it all up.

Co-Editor, Democracy: A Journal of Ideas

Author, The Next Deal

Kenneth Baer and Andre Cherny, A Message to our Readers, Democracy: A Journal of Ideas, Issue #1, Summer 2006.

In the 60 years since FDR’s death, Democrats have won more than 51% of the vote exactly once. We’re flying in the face of a long history of being unable to put together a long standing governing coalition in this country… one that we haven’t been able to put together since the new deal.

So, what from the past can we take inspiration from, instead of going back to it? If we take the supposition that America is now changing again in very radical ways, what are the ideas that can be as radical in our time as those that Frank Roosevelt put in place in his time? That’s a conversation that needs to happen going forward… taking those lessons and applying them to our time.

Click to Listen to the Show (24 MB MP3) The US attorneys scandal turns on politicization of justice — specifically on the question of whether Bush administration US attorneys were fired...

Can anybody head off a new war that we know will end badly? This is Shibley Telhami’s question at the end of our conversation about the Iran sequel to...