"An experience sufficiently deep is our taste of eternity."

Depression—characterized by persistent feelings of sadness, hopelessness, or alienation—afflicts one of every 10 US adults. Our guest George Scialabba, a writer and public intellectual based in Cambridge, is speaking about his decades-long bout with the illness on the occasion of an article he wrote for The Baffler magazine, called “The Endlessly Examined Life.”

One of the things that hurts most about depression is that you don’t really believe that it’s ever going to go away, get better. It just doesn’t seem like something with a plausible cause. So you can’t imagine what the remedy is. So people should tell you: “Look, eventually, everybody gets a little better. Some people are still mildly depressed, but virtually no one is acutely depressed for decades and decades — their whole life. It’ll get a little better, and probably a lot better. So hang on.” George found and published the various clinical notes that his doctors wrote about him and his condition over nearly 40 years. It’s the first publication of its kind—part personal journey, part modern medical history of depression therapy, drugs, and electro-shock treatments. We’re talking, now, about what the doctors tend not to write down: namely, what depression has to do with the deep philosophical and religious search about life.

One of the things George found in his own search was the humanism of D.H. Lawrence. As George reads from his essay collection, The Modern Predicament:

Lawrence believed that the universe and the individual soul were pulsing with mysteries, from which men and women were perennially distracted by want or greed or dogma. He thought that beauty, graceful physical movement, unselfconscious emotional directness, and a sense, even an inarticulate sense, of connection to the cosmos, however defined – to the sun, to the wilderness, to the rhythms of a craft or the rites of a tribe – were organic necessities of a sane human life. “Man has little needs and deeper needs,” he wrote. “We have fallen into the mistake of living from our little needs till we have almost lost our deeper needs in a sort of madness.”

The Depressed Person
David Foster Wallace, Harper's
A short story from the late author, who suffered acutely of depression. "The depressed person was in terrible and unceasing emotional pain," Wallace begins. "And the impossibility of sharing or articulating this pain was itself a component of the pain and a contributing factor in its essential horror."
Reflections on the Death of a Porcupine and Other Essays
D. H. Lawrence
A summary of the Englishman's paganism. "The most convincing philosophy of life that I know," George says. 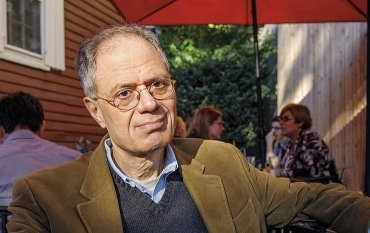 Ideas as a life, not a living. In this world of overrated pleasures and underrated treasures, as the songwriter said, I’m glad there is George Scialabba. In the din, that...