[Thanks to Forton Twelve, herbert browne, and davispeter for the nudges.] 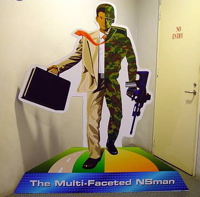 Last week’s show on the future of the all-volunteer military raised several questions that made us wonder about the robustness of America’s appetite for national service. Why, when we’re at war in Iraq, is most of America at WalMart? Why are well-educated elites underrepresented in the armed forces when this hasn’t always been the case? And does the fact that we’re recruiting foreigners to serve in the US military mean that our own citizens are failing in a basic patriotic duty?

The bigger question here is how do you encourage people — especially those just out of high school or college — to serve their country, either in the military or as a civilian? Are they signing up for the Peace Corps or City Year or the Army in smaller or bigger numbers than in previous generations? Does it matter whether the incentive is idealism or something more material, like money or a more rapid path to citizenship? Are the results better in a mandatory or a volunteer system? Is some kind of widespread national service actually critical for maintaining our democracy?

Tell us your stories.

Author, AWOL: The Unexcused Absence of America’s Upper Classes from Military Service — and How It Hurts Our Country, Keeping the Faith: A Father-Son Story About Love and the United States Marine Corps, and Baby Jack: A Novel

Currently writing a book about Iraq and national service

Earlier today we talked with Vanessa Savage who has been a youth leader at City Year since 2005. Savage says that one of the things that has changed her worldview is working with a diverse group of kids. “Some of the kids that I work with are privileged, some of them are poor, but they all have the desire to make a positive contribution to society. It’s insipring to see kids from different backgorunds working toward the same goal.”

Steve Benen, Bush breaks promise on commitment to national service, The Carpetbagger Report, June 18, 2003: “When Bush was elected, many conservatives hoped he would follow their lead and do away with AmeriCorps. In a surprise move, Bush didn’t. Instead he got behind increased support for AmeriCorps and other national service programs, including a volunteer program his administration labeled the USA Freedom Corps.”

PopeyeChicken, I was in the Peace Corps for two years. Very few people would consider that “service to our country.”, PopeyeChicken, February 22, 2004: “People like Peace Corps volunteers and related workers are in the front line in combating anti-Americanism. It might be slow, it might not be sexy or macho and there are no guns involved. But it’s the most important and most effective way to prove to foreigners that we mean well.”

Mark Shahinian, Bigger Peace Corps, Paltry Effort, The Washington Post, August 20, 2002: “In reality, the Peace Corps does more to make us Americans feel good about ourselves than it does to fight that poverty.”

Thomas a. Bowden, Compulsory Service for High School Students, Capitalism Magazine, September 1, 1998: “In Bethlehem, Pennsylvania, angry parents and students took the local school board to court, arguing that such a mandatory service program for high school students imposed the kind of “involuntary servitude” forbidden by the United States Constitution.”

Bryan Bender, Military considers recruiting foreigners, The Boston Globe, December 26, 2006: “The armed forces, already struggling to meet recruiting goals, are considering expanding the number of noncitizens in the ranks — including disputed proposals to open recruiting stations overseas and putting more immigrants on a faster track to US citizenship if they volunteer — according to Pentagon officials.”

What I suggest is: try this GI Bill, scale it up over the next ten years. Get to a critical mass, and then the country could have a real debate — should we make this mandatory or not — once we have the infrastructure in place, once we’ve seen this idea at scale, once we see how it affects the culture of the country. Right now to say mandatory, I think, it’s fun to talk about, it’s controversial, people like to argue constitutional rights. I don’t think the country — even practically from an infrastructure point of view — is ready for that. And we don’t need it.

And [my son] decided that he wanted to go into the Marine Corps, which basically shocked me in the sense of a snob being shocked by his son making a lesser choice than I thought he had potential for.

I put a Marines bumper sticker on my car, went up to my garage to get my oil changed, where I’d been having my oil changed for fifteen years, and within five minutes, not to be maudlin or anything, I was standing there with tears in my eyes, actually hugging the guy who’d been changing my oil I barely knew, cause his son was in Afghanistan fighting too.

There isn’t anybody who served in both the all-volunteer period and the draft period — and I served in both, about half my career was in the draft era — nobody would argue that the all-volunteer force is a superior force. It’s a much superior force. And anybody who understands the mechanics of compulsory service — of the draft — understands that it has to be legislated in Washington. And there has never been an equitable draft.

There’s no question that it’s a little odd that here we are four years into a war and our leadership in Washington has never asked any of us to serve — has never asked America to make any real sacrifices for this war.

I’ll tell you, I believe the country is ahead of our leaders on this. The true America came out after 9/11, after the Indian Ocean tsunami, after Katrina. Millions of Americans volunteered, donated blood, gave billions of dollars. You see it every time there’s some kind of disaster or need. It’s in the American spirit to give, but our leaders need to call on us to give, and they need to provide the opportunities.

The Future of the All-Volunteer Military

Click to Listen to the Show (24 MB MP3) Training instructors at Lackland Air Force Base saluted with a ceremonial fly-over. [Linda H. Rasch / Flickr] The U.S. military has 1.4 million...