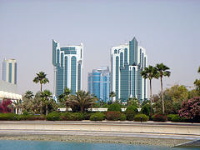 Yasmine El-Rashidi wrote to us last night after being on the Dubai show. Her landline and internet had gone down just before the show (“it’s one of those things about Dubai that people don’t realize — in the midst of the boom they can’t seem to keep up with some things”) and we were stuck with a cellphone that gave us less Yasmine than we had been hoping for. Less than she had been hoping for, as well.

She still had a few good sermons left:

I seem to have a really different take on Dubai than most. Part of the problem I think is that people have misperceptions about neighbouring countries… like hearing Kuwait, even, grouped with Saudi in the Kingdom of Darkness description. I spend much time there, and I tell you, that’s far from the reality. Kuwait is more open and liberal than Dubai in many, many ways. One thing I meant to mention that I didn’t is that I think Qatar will eventually — quietly — rise above Dubai. In fact, I’m surprised no one mentions the hard facts. If one actually looks at the figures, Qatar’s growth is more startling than Dubai’s. In terms of the “material” offerings — malls and the like — it has everything Dubai has but not branded as the biggest and best in the same way.

The difference between Doha and Dubai is soul. Doha’s Emir is a visionary in his own right. Not only though has he conceived of a booming economy that has taken gas wealth and created self-sustaining industries, but he has taken it and with it created hubs of culture in the region — the Qatar Islamic Museum (which is a brainwave of an idea), is taking 40 of its artifacts on tour to the Louvre and then to New York. The vision behind the museum is exceptional. The Doha Debates, hosted by Tim Sebastian, take place out of Doha’s Education City, which is evolving into a reigonal center for such. And the place is built with much more planning and character than Dubai.

Will Doha ever be a New York? No. But it’s definitely evolving into a more enticing place live if one is looking for energy and inspiration… while still getting the material comfort and wealth.

We’ll be hearing more from Yasmine — with better sound, and longer sermons — in the future.

In a Humvee on the road to Baghdad from Kuwait, 2003 Meet Toby Johnson, one of the guests for our Women in War show. After graduating from West Point, Toby...