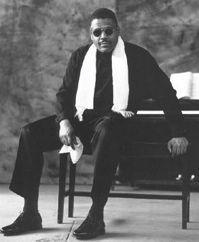 The pianist Donal Fox is a bridge-builder between Johann Sebastian Bach and Thelonius Monk. He plays a sort of music without frontiers – open source music, in a sense – with a gift for improvisation that used to be an essential trick in all forms and styles of music, including European classical music. It was called “extemporization??? and all the great masters – Beethoven, Mozart, Handel and Bach – wrote open spaces into their scores for spur-of-the-moment musical statements by other performers. The boy wonder of the 19th Century piano, Franz Liszt, age 12, would ask anyone in the audience to provide a theme on which he’d perform an “extemporary fantasy??? as long as he felt like it. It is mainly jazz that has kept improvisational skills alive. And now it’s Donal Fox and a rare few others who have repositioned that jazz feeling of freedom on the firm old foundations of classical composition, and made them swing.

Our other classical to jazz show, Dvorak to Duke Ellington, with Maurice Peres.