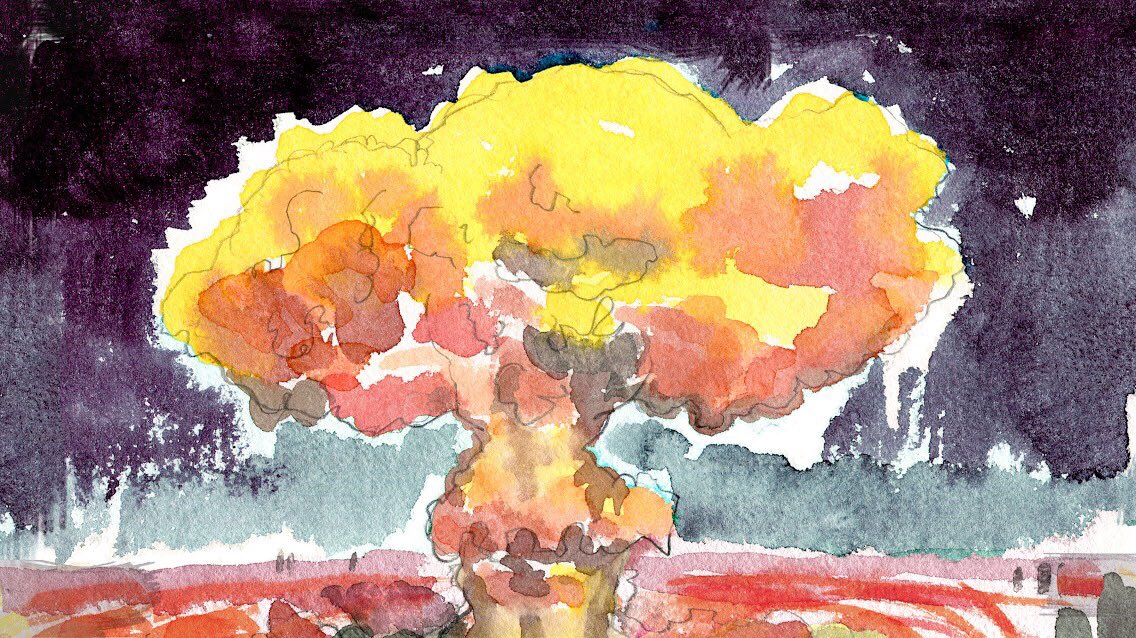 The Doomsday Machine in 2017

Nukes are on people’s nerves again, for good reason.  Our tremors, though, could be a symptom of sanity.  What do you mean: fire and fury, the incineration of nations, on one man’s decision? What they never told us was that the Cold War could end, but the worst thing about it—the Age of Nuclear Anxiety—could keep right on going. Why is the worst of all weapons still out there, 25 years later? Daniel Ellsberg knew he was risking life in prison for leaking the Pentagon Papers about the Vietnam War. But even then, most of 50 years ago, he was compiling a more awful story he wanted to liberate. And now, at the age of 86, he’s done it with the publication of The Doomsday Machine: Confessions of a Nuclear War Planner. His latest book gives us the official and documentary version of our nuclear nightmare. The real story strangely resembles the black-humor script of Doctor Strangelove.  Hearing Ellsberg’s stories, you may be reminded of the War Room scene from Kubrick’s film with our president and the Russian ambassador talking total world destruction, on autopilot:

The strangest part of Daniel Ellsberg’s Confessions is his argument that the movie parody is still running in real life: the doomsday machines are still on hair-triggers.

Elaine Scarry is a literary scholar who happens to be an expert on what nuclear weapons have done to democracy. Her book, Thermonuclear Monarchy, is an essential guide to this terrifying power.  In October, Elaine Scarry, helped convene a huge conference of citizens and experts around this mystery of presidential authority over nukes.

Senator Ed Markey of Massachusetts is the lonely-looking Democrat in Congress who wants to contain the president’s nuclear authority. He announced recently that he was filing a bill to prevent President Trump from launching a first strike on North Korea without first getting a congressional declaration of war.

William Perry helped build Silicon Valley as the tech capital, then ran the Pentagon in Bill Clinton’s presidency.  He was one of four old establishment figures who ten years ago called for “a world free of nuclear weapons”—alongside George Shultz, Sam Nunn and Henry Kissinger. Time Magazine called them “The Four Horsemen of the Nuclear Apocalypse.”  Today, William Perry, at age 90, says the danger of nuclear catastrophe is greater than it was during the Cold War and that most people are blissfully unaware of it.

Vincent Intondi takes on a lot of unconventional angles in his book, African Americans Against the Bomb.  He reminds us that black American artists and political leaders—from Langston Hughes and Charlie Parker to Bayard Rustin and MLK— have long been on the front lines of the disarmament fight. Today, he says, it’s still people of color—primarily in the global south—leading the charge for nuclear abolition.

Guest List
Daniel Ellsberg
author of The Doomsday Machine: Confessions of a Nuclear War Planner and former United States military analyst
William Perry
former Secretary of Defense under President Bill Clinton and author of My Journey at the Nuclear Brink
Elaine Scarry
professor of Aesthetics and the General Theory of Value at Harvard University and author of Thermonuclear Monarchy
Senator Ed Markey
junior United States Senator of Massachusetts
Vincent J. Intondi
professor of African American history at Montgomery College and author of African Americans Against the Bomb
Reading List
The President and the Bomb
Adam Shatz

Almost Everything in Dr. Strangelove Was True
Eric Schlosser

Are We Numb to Nukes?

We’re thinking our way through a plausible nuclear emergency with Elaine Scarry who reminds you – we’ve got a weapons monarchy in this democracy. How can we call it a...

Billy Bragg has been the premier troubadour for British radicalism for more than thirty years: a democratic socialist with a guitar and a steadfast commitment to fighting fascism, racism, and homophobia. He...