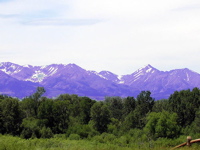 Is this for real, or was it photoshopped? [Patchoulli / Flickr]

“Purple mountain majesties,” if it sounded less, well, purple, could be the new bumper sticker for Montana. As the fourth-largest state with fewer than a million residents, its vast uncrowded reaches are nothing if not majestic. Its mountains — both big and small — are the stuff of postcards. And politically, though you might not expect it, it’s right there in the purple spectrum.

The flat, dry eastern part of Montana tilts Republican; the greener, mountainous west leans Democratic. It’s not yet clear how new imports — retirees looking to be left alone, and hip young things working online and in the market for lattes and sushi — are changing voting patterns. Although as a whole registered Republicans have a small edge, roughly 25% percent of the population is independent, which determines everything.

All of which makes the close Senate race (between Republican incumbent Conrad Burns and Democratic challenger Jon Tester) a nail-biter. Montana voted red in nine of the last ten presidential elections, but its own Senate is majority Democratic, and in 2004 it picked uber-charismatic Democrat Brian Schweitzer for governor. (You can hear Schweitzer on one of our global warming shows here.)

Governor Schweitzer is campaigning hard for Jon Tester, an organic farmer and music teacher with a flattop haircut, a generous belly, and a down-home demeanor. Tester is currently the state Senate president. Conrad Burns, trying to dig himself out of a Jack Abramoff hole, is doing his best — using the folksy charm of his former radio and cattle-auctioneer careers — to paint Tester as a raging liberal.

Just how liberal is Tester, really? He’s pro-choice and pro-environment, but he’s also pro-gun. Definitely not East Coast liberal. But are he and Schweitzer a new breed — “Western Democrats” — or are they just dyed-in-the-wool Montanans? In other words: populists, because Montana Democrats were born in opposition to the the Anaconda Copper Company that controlled Montana — its newspapers, its politics, its industry — for years; and libertarian, because although Montana’s no longer a frontier, it’s still faaaaar away from any kind of big city? You could also imagine, though, that Tester and Schweitzer are bellwethers for the “purpling” of other Western states (the result of big demographic changes).

So: is Montana leading a trend, or is it just staying true to its long-time unpredictable spirit? And either way, are Tester and Schweitzer a winning new model for Democrats in rural America?

Professor, The School of Journalism, University of Montana

Thanks to emmettoconnell for suggesting Kari Chisholm

Craig Sprout, Monatana Race Catch-Up, gather.com: “While considered by many to be a reliably “red” state, the fact is Montana can almost be counted upon to be contrarian. Remember: this is the state that sent Jeanette Rankin to Congress and Mike Mansfield to the Senate. In an election where a Republican president won by 20 points, we elected a Democrat governor.”

Marrie Horrigan, Montana’s Tester on Track to Pick Up Another Senate Seat for Dems, The New York Times, October 24, 2006: “Burns was near the top of the Democrats’ target list coming into the 2006 campaign cycle, based on his narrow victory in his last Senate outing.”

Pogie, Why Democrats Lose Elections, Intelligent Discontent, October 21, 2006: “Electing Jon Tester matters. Jon Tester may not pass every progressive litmus test, but electing him will much better protect the agenda that progressives believe in.”

Josh Eidelson, The Muckraker’s Reference Section: Conrad Burns, TPM Muckraker: “Republican Conrad Burns, the junior Senator from Montana, has been named by the Wall Street Journal and Washington Post as one of the main possible targets in the Jack Abramoff investigation.”

Matthew Continetti, How the West Was Won, The Weekly Standard, October 30, 2006: “But Tester might also be something more. The strength of his candidacy is one more sign that the Democratic party is growing in the West. The Interior West–which includes Arizona, Colorado, Idaho, Montana, Nevada, New Mexico, Utah, and Wyoming–is slowly embracing Democratic politicians and Democratic policies.”

Click to Listen to the Show (24 MB MP3) Hello Capitol [dospaz / Flickr] Ohio’s 15th congressional district presents one of the top opportunities for Democrats this year. The Columbus-area electorate is...