Here’s an irony for you. I’ve only seen one candidate in my lifetime of covering politics who had the skill, the instincts and the energy of Harold Ford Jr. His name was George Corley Wallace. 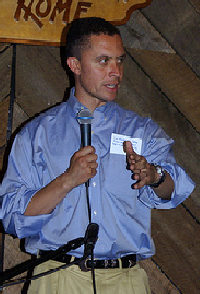 Tennessee voters haven’t elected a Democratic Senator in 16 years and they haven’t elected a black Senator since Reconstruction. Harold Ford, Jr. is out to buck both trends. He faces Chattanooga Mayor Bob Corker. Bill Frist is vacating the post to think presidential thoughts.

Luckily for Ford, Tennesseans traditionally vote geographic loyalties, not racial ones. Voters have inherited Civil War-era allegiances, when eastern TN counties sided with the Union and western ones went to the Confederacy. Today, western Memphis skews Democratic, eastern Knoxville is solidly Republican, and Nashville, right in the middle, is the battleground to watch. Racial animosities that tore up the South in the 50s and 60s never really hit in Tennessee, thanks largely to local Yellow-Dog Dems who voted through civil rights legislation. So today, a Chattanoogan might vote for a black Democrat like Ford, but he’d never vote for a man from Memphis.

All this to say that the recent campaign buzz playing up the racial divide in this race seems out of character for Tennessee. An attack ad against Ford features a shadowy dark figure and a black cross; Ford alleges that the Corker campaign darkened his complexion in campaign literature and wrote that he “tries to pass” as a conservative.

Subtext of “passing” aside, Ford is well aware that he needs to appeal to conservatives if he’s going to win this race. Al Gore was massively popular as Senator here, but he lost the state in 2000 when he adpoted more liberal positions on gun control and abortion rights. Ford is a Tennessee Democrat to the core: he’s pro-life, he supports gun rights, the Patriot Act and the war in Iraq. As Congressman, he’s voted with Republicans on the estate tax, school prayer, and flag burning, and he illustrates points with constant references to God, the Bible, and Ronald Reagan.

For Corker, the main challenge will be to convince voters that he’s more conservative than Ford. Beating fiercely conservative challengers in the primary meant that Corker alienated his base on the far right; now that he faces a moderate, voters like joe public say they have trouble distinguishing between the two.

Tell us your impressions of the race, offer parallels to local races where you are, or, if you’re inspired, give us a 300 word essay on Knoxville bluegrass, Nashville country, or Memphis blues. We’ll read the best ones on air.

Help create our reading list on the 2006 Election Wiki.

We talked to blogger Jim Reams, of Nashville Knucklehead, to get his take on one of the hotter topics this election year: immigration.

We’ve been thinking a lot about the Senate race in Tennessee, but we can’t always make sense of the historical regionalism that shapes party loyalty in the Volunteer state. ...

From new intern John La Rue: Since we took a look at Tennessee in a show two weeks ago, the race has grown a little more confrontational. Incumbent Senator Bob...