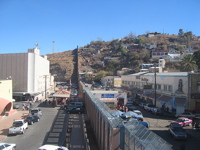 Arizona’s 8th Congressional District stretches north from the border to a bit of the southern Tucson suburbs, but a Democrat up in Tucson doesn’t necessarily want the same things as a Democrat down south. Tucson Democrats, explained Michael Marizco, author of Border Reporter, are more likely to volunteer to come south to supply water stations for border crossers; along the border, Democrats and Republicans both are more likely to have had their houses broken into as the same crossers emerge from the desert, desperate for food. In any case, Marizco believes, the closer you live to the border, the more likely you are to believe that the current policy of law enforcement isn’t working.

According to The Arizona Daily Star, Republican Randy Graf has made border security the centerpiece of his campaign, but trails Democrat Gabrielle Giffords, even among voters who say immigration is an important issue. The GOP has pulled advertising support from Graf’s campaign but can’t have given up completely; Graf has a local fundraiser scheduled with Karl Rove.

Marizco, no softy on border issues, believes the only solution is a guest worker program. How does the immigration debate change as you move toward the border, from up here in Boston down to Arizona, and from Tucson down to Douglas? What does a district that lives the border issue every day think about the national border postures of both parties?

Extra Credit Reading
Blake Morlock, GOP committee’s foray into CD8 like a bad hangover, Tucson Citizen, September 25, 2006: “Maybe you know this guy. He’s drunk, walks into your house late at night, breaks something, tries to put it back together but makes a bigger mess. Then he leaves loudly and knocks over a trash can, waking neighbors as he disappears into the night.That’s how the National Republican Congressional Committee entered and then left the race to replace retiring Republican congressman Jim Kolbe.”

GOP Coming; Giffords Playing Huffman Dodgeball, Arizona 8th, September 26, 2006: “A recent GOP fundraiser where Click announced his “150%” support for Graf is another indicator that the party is coming together and making an effort to repair the damage inflicted during the primary.”

Jim Nintzel, High noon for immigration, Salon, October 2, 2006: “Democrats are poised to pick up a U.S. House seat in Arizona. Can Republican Randy Graf stop them by exploiting voters’ fears of illegal immigrants?”

AZ-8: GOP Wounds Healed?, Real Clear Politics, September 8, 2006: “Giffords, the Democrat, focused on Iraq and healthcare during the primary, but is now going to be in a contest where immigration dominates the political landscape.”

Mickey Kaus, Frist Fence Fakeout?, Slate, September 25, 2006: “Has Sen. Frist given up on the border fence? It sure sounded that way on George Stephanopoulos’ This Week.”

This fall we’ll go state by state, examining some of the most contested Congressional and gubernatorial races in the country. Tuesday we start with the Rhode Island Senate race between...