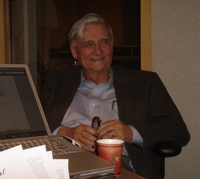 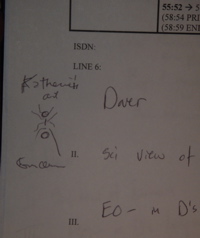 His sketch of an ant for Katherine, on her show script [Brendan Greeley]

But we will count Wednesday evening on Professor Wilson, a field biologist who did as much for ants as Jonah did for whales, to interpret the sweeping dismissal of the “intelligent design” alternative to Darwin–first by the Dover voters last month, and now by the Federal trial court.

Not just the pseudo-science but also the political manipulations and misrepresentations of the ID movement have been heaved decisively out of the courts of both law and public opinion.

Could it be that the long American war on Darwin is over?

Those who disagree with our holding will likely mark it as the product of an activist judge. If so, they will have erred as this is manifestly not an activist Court. Rather, this case came to us as the result of the activism of an ill-informed faction on a school board, aided by a national public interest law firm eager to find a constitutional test case on ID, who in combination drove the Board to adopt an imprudent and ultimately unconstitutional policy. The breathtaking inanity of the Board’s decision is evident when considered against the factual backdrop which has now been fully revealed through this trial. The students, parents, and teachers of the Dover Area School District deserved better than to be dragged into this legal maelstrom, with its resulting utter waste of monetary and personal resources.

In Professor Wilson’s general introduction to Darwin’s four monumental books, now in one volume as From So Simple a Beginning, you can sample two marvellous stylists in high-scientific prose, first Wilson, then Darwin:

Great scientific discoveries are like sunrises. They illuminate first the steeples of the unknown, then its dark hollows. Such expansive influence has been enjoyed by the scientific writings of Charles Darwin. For over 150 years his books… have spread light on the living world and the human condition. They have not lost their freshness: more than any other work in history’s scientific canon, they are both timeless and persistently inspirational…

The revolution in astronomy begun by Nicolaus Copernicus in 1543 proved that Earth is not the center of the universe, nor even the center of the solar system. The revolution begun by Darwin was even more humbling: it showed that humanity is not the center of creation, and not its purpose either. But in freeing our minds from our imagined demigod bondage, even at the price of humility, Darwin turned our attention to the astounding power of the natural creative process and the magnificence of its products.

E. O. Wilson, general introduction, From So Simple a Beginning

There is grandeur in this view of life, with its several powers, having been originally breathed into a few forms or into one; and that, whilst this planet has gone cycling on according to the fixed law of gravity, from so simple a beginning endless forms most beautiful and most wonderful have been, and are being, evolved.”

Charles Darwin, On the Origin of Species, 1859

Click to Listen to the Show (24 MB MP3) Darwin’s beer [flickrwegian / Flickr] Back in August, we did a show on intelligent design with Ken Miller. The idea was to try...

24 MB MP3 It might be Creationism in a cheap tuxedo, but a lot of people like the cut of that tuxedo. Kenneth Miller   [Skronk/Flickr] More than 20 states are thinking about challenging Darwin’s...