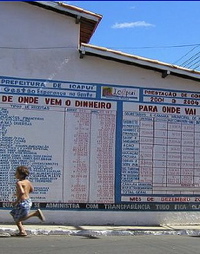 The participatory budget of Icapui, Brazil. The left column reads, “where the money comes from.” The one on the right reads, “what the money is spent for.” Below it says,”When the administration is transparent, everything works smoothly.” [Paolo Massa / Flickr]

Back in September we introduced the idea of doing a show about race, class and voting with Harvard Law professor and voting rights activist Lani Guinier. While prepping for that show, I had an amazing conversation with Professor Guinier. A conversation that, as it turned out, had almost nothing to do with race and class.

Instead, we spent an hour talking about “experiments in democracy” — small but radical, hyper-local examples of people re-defining democracy to be more about civic participation and less about a few minutes in a voting booth. Specific examples she cited included a citizen assembly in Vancouver that redesigned British Columbia’s election system, deliberative citizen roundtables in Los Angeles, and participatory budgeting in Porto Alegre, Brazil.

So as the election approaches and we near the end of our midterms series, we’re taking a break to focus on the nature of democracy and civic engagement beyond the ballot box. How are people trying to re-invent democracy in small but significant ways? How are their efforts important or different — successful or not? And could these case studies in LA or Porto Allegre be applied on a wider scale?

Thanks to sidewalker for helping research the BC Citizens’ Assembly.

Author, Community and the Politics of Place

Thanks to emmettoconnell for suggesting Daniel Kemmis.

Author, Militants and Citizens: The Politics Of Participatory Democracy In Porto Alegre

Gianpaolo Baiocchi works on participatory budgeting initiatives in the US and Canada with Josh Lerner, who was recommended by momos. Thanks to momos for the recommendation and for the links.

Steven Hill, Citizens’ Assembly Can Lead Reform, The New America Foundation, March 15, 2005: “A better vehicle for reform is available, one well-suited to the Governor’s populist style. It’s called a Citizens’ Assembly, and has been on display for the past year to the north, where our Canadian neighbors in the province of British Columbia turned over to the people the task of basic political reform. It holds the advantage of taking the partisanship out of reform, something Schwarzenegger badly needs to do if he wishes to succeed.”

And check out these audio and video clips from the Citizens’ Assembly courtesy of Sidewalker.

(via John K. Fitzpatrick) Parecon, ZNet, “Participatory Economics (Parecon for short) is a type of economy proposed as an alternative to contemporary capitalism. The underlying values are equity, solidarity, diversity, and participatory self management.”

(via Stephen Buckley) New England Town Meeting, New Rules Project, “The New England town meeting and school district meeting are the only direct democracy institutions in the United States involving lawmaking by assembled voters. Law making by assembled adult males dates to the age of Pericles in Greece in the fifth century B.C. But the only other currently assembled voters’ lawmaking body is the Landsgemeinde in a handful of Swiss cantons.”

(via Stephen Buckley) Peter Porcupine, Town Meeting Time, Peter Porcupine, May 19, 2005: “To Porcupine, a really stressful spinning class just isn’t in the same catagory of importance as an annual life and death struggle to hoard enough food to last during a New England winter, so the ‘too busy’ excuse doesn’t wash.”

Get involved in some experimental democracy yourself:

ThereOughtaBeALaw.org, “ThereOughtaBeALaw.org is a website for people to work together to create online bills that they think should be laws. You can post new ideas for laws, share bills with your friends, sponsor other peoples bills and suggest changes to any bill in the system.”

e-democracy.org, “Building online public space in the heart of real democracy and community since 1994.”

The Citizendium Project, “The Citizendium (sit-ih-ZEN-dee-um), a “citizens’ compendium of everything,” will be an experimental new wiki project that combines public participation with gentle expert guidance.”