Four summers ago, the city of New York opened back up at two every morning to watch soccer games in cities four time zones away. I made a bet with the busboy where I ate breakfast and won; I made bets with a friend in Germany and lost. He called after the game, the German, proud like a favorite uncle, to explain how team USA had played better than anyone had a right to expect. Almost, he said, respectably well. I pretended to be flattered, but as an American it’s my fate to never really care about the American soccer team: not indifferent, but also unable in any World Cup year to name more than a single player. 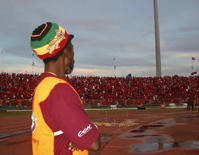 A sea of red from the match against Bahrain that that secured Trinidad and Tobago’s World Cup berth last November [C*POP, via Caribbean Free Radio]

This year Trinidad and Tobago made the tournament, according to the BBC favored to win at 1000 to 1. The “Soca Warriors,” they’re called, from a Trinidadian dance. The evening the warriors qualified, podcaster Georgia Popplewell recorded noise on the street in Trinidad that she describes as “blaring car horns, rhythm sections, stream of consciousness, slightly distorted audio and the sounds of a country in the throes of ecstasy.”

So for Trinidad and Tobago it’s a pretty big deal.

We want to know how soccer can explain each nation that loves it. We’ve taken as our guide the excellent but unfortunately titled The Thinking Fan’s Guide to the World Cup, which breaks down what the sport means, team by team. To the Brazilians and the Germans it’s a birthright; to England it’s a reliable Mets-style heartache. To Trinidad and Tobago: a miracle.

What is it for you? Did you marry into a soccer nation? Were you born in one? What was your best World Cup summer?

Co-author, Yugoslavia: Death of a Nation

Laura Smith-Spark, Anyone seen a Trinidad and Tobago shirt?, BBC Sport, May 6, 2006

[If Germany wins] We will celebrate the night, and the next day we will look around ourselves and say, did we offend anybody? Sorry for winning, do we have to apologize somewhere?

The other reason for optimism was that the Serbian national team looked like a good unit of players, they did have some kind of winning spirit and they liked to play for each other. They had some sort of togetherness, and this is what Serbian football traditionally likes. We are considered to be European Brazilians.

This side, that Serbia has now, is more like a German [team]. They fight, they’re very hard to beat… The main idea is that togetherness has been brought back to the national team and that is what people’s hopes are being built upon.

…a younger generation, the people who are playing right now, came of age at the time when we didn’t remember what the heyday of cricket was all about. For us football had always been what you get on TV, what you play in backyards… it was the sport we identified with most immediately.

I’m extremely excited [for Trinidad playing England]. Is it going to be a historical clash? No, it really isn’t. Football was never a response to colonialism. We’re playing football to prove that we’re good enough to be recognized on the international stage. As a footballing country we’re ready to take on one of the best teams in the world.

Today one of our biggest tabloids printed the text of our national anthem. I think that there are very few countries–America, Britain or France–where you would have to print out the national anthem because everybody knows it by heart.

Germans are seen as a brooding, introspective people. I think everyone is looking forward to having a four-week party. The sunshine has just come in time, it’s a weekend, it’s a friday evening, everybody wants to have a good time, and let’s hope that happens.

An Uncalled Foul, a Moral Victory

On the same sad day that Trinidad and Tobago exited the World Cup, we got an email from Christopher Yee Mon, “hailing from Brooklyn but Trini to de bone,” who...

To prepare for our World Cup show, we emailed listeners from World Cup countries (not including the US, because there are too many of you and most of you don’t...