We’re all going to die. Someday. (Barring some incredible advances in medicine that confer virtual immortality on everyone.)

Joao Pedro de Magalhaes is a post doc at Harvard studying genetic life extension in fruit flies and mice. We called him up, visions of Tithonus and Malthus dancing in our heads.

I’ve always been afraid to die. More than the moment of death itself, I’m afraid of the disease and suffering that’s associated with it.

Probably the biggest misconception about aging research is that you’re working to extend the life span of old people. They think it’s about having a very old person, a very sick person, and sticking tubes in them and preserving a life of suffering. We’re not trying to extend those years of life when you’re unhealthy, the main goal is to genetically preserve health and avoid or postpone aging altogether. 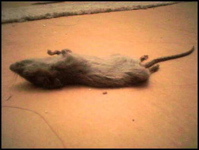 One that didn’t get the genetic fix [semarr / Flickr]

There are a handful of genes in mice. If you either knock them out or increase their productivity, you can delay or accelerate aging. You can actually increase a mouse’s lifespan by 50%. It’s impossible to quantify aging, but in these mice, the whole degeneration is slowed. They have a lower cancer incidence, they’re more active, they don’t lose as much muscle, they don’t develop diabetes (or they develop it at later ages than normal).

At this point, we don’t really know if it works in humans. I don’t think we’re going to see it work in human beings within the near future….Still, I don’t anticipate that I’ll be tired of living any time soon.