“I will personally establish a Planned Parenthood clinic on my own land which is within the boundaries of the Pine Ridge Reservation where the State of South Dakota has absolutely no jurisdiction.??? 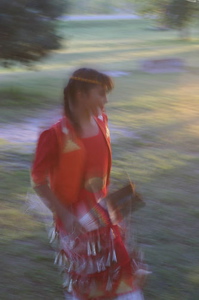 When Gov. Michael Rounds signed HB1215, the law that will ban all abortions in South Dakota as of July 1 (including those procedures for victims of rape and incest, excepting those that could potentially save the mother’s life), he said he “fully expected a legal challenge.” He probably didn’t expect that the challenge would come from Cecilia Fire Thunder, President of the Oglala Sioux tribe.

The statement aroused quite a bit of interest among LiveJournalers after kathrynt proposed a fundraising campaign to support the proposed clinic. Blogger tezliana did some digging and emailed Planned Parenthood of South Dakota for a statement.

Things are unfolding quickly in South Dakota, so this information may change at any time, but we are not currently planning to establish a clinic on tribal land. While we appreciate Ms. Thunder’s support, I believe she made the comment prior to speaking with us about a clinic on the Pine Ridge Reservation.

When Cecilia used the name Planned Parenthood, she used the name in reference to an abortion clinic in general. She fully intends to donate land so that a clinic can be built….You can’t possibly expect a victim of violence to raise a 100% healthy child.

American Indian women are sexually assaulted at a 3.5 times higher rate than women in all other racial groups. Given these numbers and her background counselling rape victims as a nurse, Fire Thunder says she had to take a stand.

Rather than having our daughters and our women have to drive several states away, as if they were criminals, to protect their own health, we wanted to have a viable option closer to their homes, until this law is struck down. We intend to take the lead to make sure that we live up to our constitution and our own ideals, and respect our female citizens.

Could plans for a clinic on tribal lands actually go through? Will this move test the limits of tribal sovereignty? South Dakota Attorney General Larry Long says the state might be able to enforce HB1215 in Indian County “but only against non-Indian women who receive abortions by non-Indian doctors.” Could this bring down the law that would bring down Roe?

This is not a matter of an assertion of tribal sovereignty – we already have that. Nor is it a matter of confronting Governor Rounds or the State of South Dakota, it is a matter of upholding federal law, as it now exists. I believe that the South Dakota law banning abortion will be struck down as unconstitutional. We are making it clear that we support the constitutional right of women all over this country, and particularly here in South Dakota, to make their own decisions and their own choices regarding their own health.

A few months ago, we reported that Cecilia Fire Thunder planned to establish a family planning clinic on the land of the Oglala Sioux Pine Ridge Reservation, where the state’s...