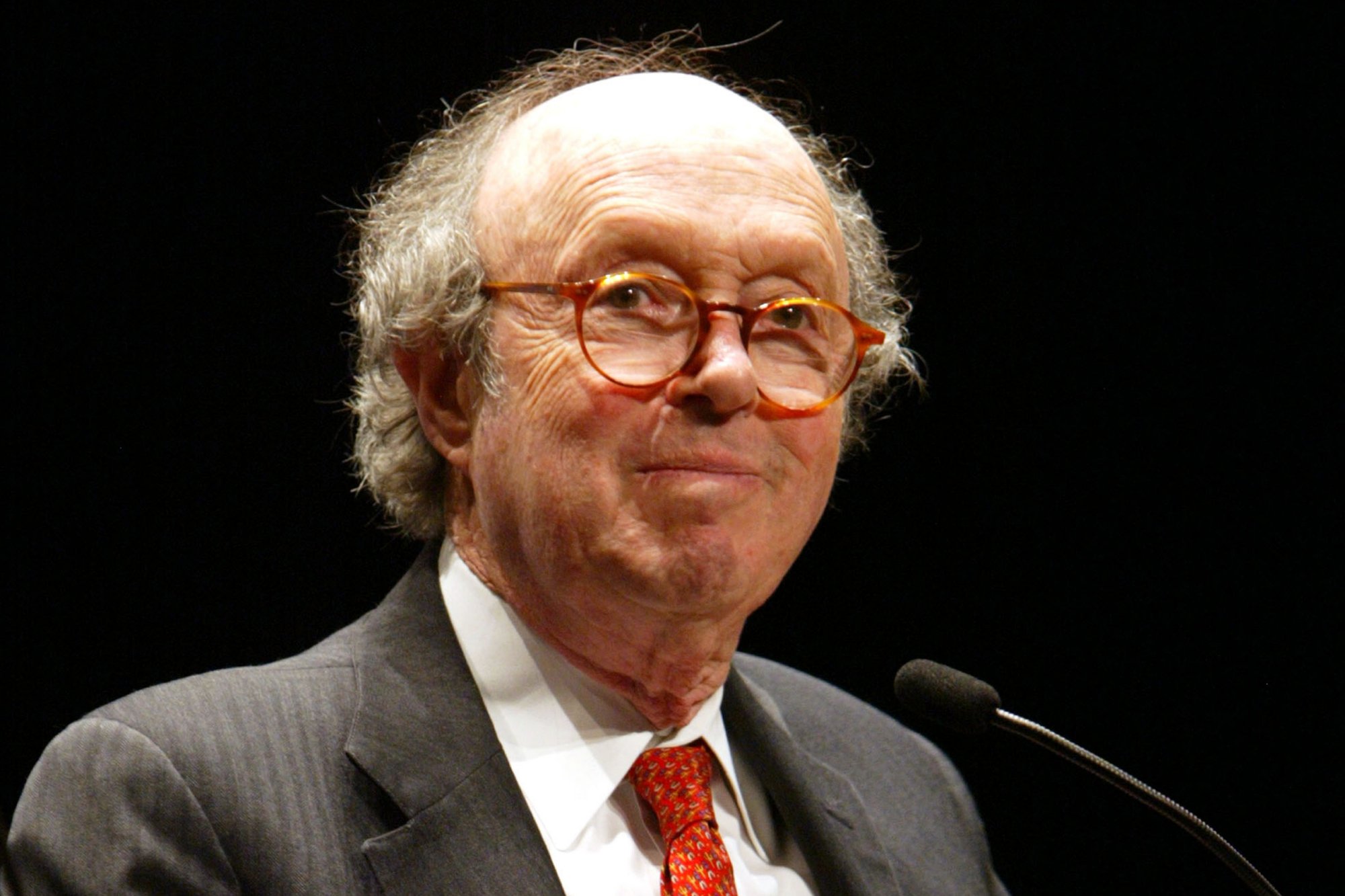 For Anthony Lewis, with love and thanks

For Anthony Lewis, with love and thanks

The best fun of being president of the US, I often thought, would be appointing Anthony Lewis to the Supreme Court. He was a non-lawyer with a persuasive understanding of the gift and genius of the Constitution. He had a historian’s grasp on how the law evolved. Justice Frankfurter said Tony knew the cases before the Court better than most of the sitting judges. And he could unfold the issues in lucid prose that grabbed me as a teen-age reader of the New York Times. It turns out now that lots of people, like my pal Rick Hertzberg, had that fantasy – of putting Tony Lewis on the Court, as a sort of teaching judge, a people’s man with law and language. Here’s what he stood for and loved to recite – in the Lydons’ living room – for example: Oliver Wendell Holmes’ dissent in a free-speech case from World War I time, the Abrams case. The best test of truth, Holmes bellowed, is “free trade in ideas.”

“…That at any rate is the theory of our Constitution. It is an experiment, as all life is an experiment… While that experiment is part of our system I think that we should be eternally vigilant against attempts to check the expression of opinions that we loathe and believe to be fraught with death, unless they so imminently threaten immediate interference with the lawful and pressing purposes of the law that an immediate check is required to save the country.”

Justice Oliver Wendell Holmes, in dissent in Abrams vs. United States (1919), quoted in Anthony Lewis’ Make No Law: The Sullivan Case and the First Amendment, page 78.

Reading that stuff, as Tony liked to say, you felt the hair rise at the back of your neck. This was his meat: law, experiment, the rights of embattled South Africans, Palestinians and American outcasts, free expression, dissent, room for ideas we hate, and thundering prose. And of course Tony found he could thunder on his own, too.

My favorite Tony Lewis columns – oddly unmentioned in the Times obit – might have been his answer to the Christmas bombing of North Vietnam in 1972, the Nixon-Kissinger “terror bombing” of Hanoi – with no measurable purpose or benefit. Peace was at hand, they had said, the war all but over, but American B-52s poured it on: 2000 strikes over 11 days. “An episode that will live in infamy,” Tony Lewis wrote. And lest we forget he kept rewriting that column every Christmas for a decade. The lessons for Americans were still: “Beware obsession. Beware secrecy. Beware concentrated power. Beware men untouched by concern for the moral consequences of their acts.”

To my taste, Tony Lewis leaves the high-water mark in consequential newspaper work in our time – before snark and life-style and propaganda and the I-I-I voice in political columns came to seem standard. Chris Hedges wrote the other day that TV as a news medium began to die when MSNBC dismissed Phil Donahue ten years ago for his reservations about the war in Iraq. I would say newspapers started their descent to the grave right about the same time, when the Times sent Tony Lewis into retirement and retained William Safire who thought the war was a great idea. “Wait and see,” Safire ended a column. I wrote to him later: “Bill, we waited, and we saw.”

Tony Lewis was my standard of excellence, though the “narcissism of small differences” kicked in, too. I thought Tony was unfair to Ralph Nader. He knew the quality of Nader’s citizenship since their law school days in the 50s, but then Tony led the liberal chorus against Nader in that very stilted and stifling Bush-Gore campaign of 2000. I thought Ralph would have ventilated it, maybe brought Al Gore out of his own infamous lock-box, maybe scratched the veneer off George Bush. I thought it was unlike Tony to be narrowing the field and the conversation that was stuck in a deep rut, going nowhere. So we disagreed, and made a radio program around the argument with both Tony Lewis and Ralph Nader. Tony indulged his friends, like me, in all manner of differences. But then I realized years ago: inside my own head the relationship went further, maybe deeper. I found myself arguing all alone over small points of politics or taste with the mind of Tony Lewis. The oddest part was that as I sparred with my internal Tony, he often won the argument – with his patience, forbearance, and long view.

Over many years Tony was inexplicably generous to me as broadcast host. He’d begun with the granddaddy of public broadcast news, Louis M. Lyons on WGBH. He was an almost-regular on the MacNeil/Lehrer NewsHour and then on my Ten O’Clock News on WGBH-TV, where he could make a 4-minute interview sing – on anything. One night it was his idol Fred Astaire, and suddenly Tony broke into song with one of the Astaire classics — I think it was “A Foggy Day.” Margie Marshall, Tony’s new wife, said she would kill me, or him, if I ever let him sing again on TV, but he might have been happy to defy us. There was more to Tony than law and politics. He wrote and talked wonderfully about his suit salesman in Filene’s Basement; about Frank Gehry’s Guggenheim Museum in Bilbao; about a fine revival of “Porgy and Bess;” about Boston’s Mayor Ray Flynn, who rated better than Ed Koch of New York, Tony judged. I loved to hear him on newspaper guys – on his sponsor, the incomparable team-builder James Reston; on the great independents and adventurers Harrison Salisbury, I. F. Stone and Sy Hersh; on the nonpareil columnist, the genius among the great craftsmen of the Times, Russell Baker.

I saw Tony at home a month ago, not knowing the end was so close. His first words: “God, I miss Tom Winship at the Globe.” The last were: “Sure, let’s record our conversation the next time.” What we talked about most that February afternoon were song lyrics. He had a great book on the top of his pile: Reading Lyrics, compiled by Robert Gottlieb and Robert Kimball. Tony knew the words of Ira Gershwin, Lorenz Hart, Cole Porter, Oscar Hammerstein, Tom Lehrer, P. G. Wodehouse and Company the way he knew the law. And he worshipped above all, I think, Frank Loesser for the words and music of Guys and Dolls: “I Got the Horse Right Here” and Adelaide’s song: “A person can develop a cold,” which Tony loved to sing. The next time, I was going to bring him the Ray Charles / Betty Carter version of another Frank Loesser classic, “Baby, It’s Cold Outside.”

Tony leaves us, I’d say, a memorable model for the best and broadest idea of a liberal at work. It wasn’t about dogma, much less radicalism. It was temperament as much as politics. It was about a modest optimism, a belief that institutions, even societies, could work on their flaws and get better. He was the human embodiment of the Warren Court, in that sense. He made a pair with his friend Justice William Brennan, who stood also for civility, compromise, persistence on an upward course. They stood for that era of reform in civil rights, in one-man-one-vote political representation, in the protection of defendants’ rights and the expansion of free speech and expression. Tony goaded the country with columns and landmark books on those central subjects, and by gum, the country got better. It can sound almost quaint, but he knew for certain that there were remedies for real ills in patient, hard-working devotion to our ideals in the Constitution and the law. So he never let up, and he never despaired.