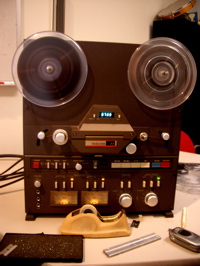 We have a tendency to overestimate what we can pack into an hour of radio and the 9/11 literature show was no exception. We recorded three author interviews but only Ken Kalfus’ made it on to the air that night. The beauty of the Internet, however, is that we can sometimes turn back the clock and offer you tape that in another era could not have been rescued from the cutting room floor.

9/11 happened as much to my book as it happened to me. I was living in Greenwich Village at the time so I was very much there that day and very much affected by it personally — but I was also affected by it as a writer. I remember reading that a lot of fiction writers went through the same crisis, which was the sense that writing fiction was about the most irrelevant and frivolous pursuit at a time when our whole worldview was changing and we were virtually at war.

Julia Glass, in an interview with Open Source, September 7, 2006

Before writing her book The Whole World Over, Julia Glass knew that her book would revolve around four characters living in lower Manhattan. She was also certain that the narrative would take place between 2000 and 2001. Glass started to write this book in March 2001. She had written nearly five chapters when the towers collapsed.

My novel is set a year after 9/11 and it seemed to me, particularly after 9/11, that there was this moral ambiguity and confusion in this country, which according to the narrator of my novel is defined as the desire to do good, which is always being undermined by the desire to feel good.

Stephen McCauley, in an interview with Open Source, September 7, 2006

In Stephen McCauley’s Alternatives to Sex, his narrator William Collins is a gay realtor who has decided to give up online dating and one-night stands in an effort to find moral clarity. We talked with McCauley about his response to September 11th.

Confessions of a Second Lifer

I am more confident in SL. Hell, I play a seven and a half feet tall elf in SL. I tend to get noticed. In RL, I’m just plain ordinary...

From the Cutting Room: Montana Senate

The Reel Deal [Alex Gaylon / Flickr] Yesterday we recorded an interview with Karen, who a blogs at Karbon Kountry Moos. She’s a rancher living in a sparsely populated...