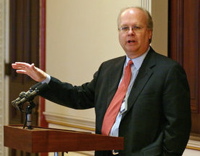 On the other hand, maybe I shouldn’t have. Hard to say. Things were different then; it was 2003 and we, you know, we owned every one of you. [whitehouse.gov]

Every time we think we understand this story, we sit down to pick it apart and realize that we have only a thread of it. We’ll know a lot more soon — Patrick Fitzgerald has to indict someone, sometime — but in the meantime, what’s going on?

Chris keeps saying that this is really a story for a novelist, and the best way to fill in the massive gaps in what we know is with conjecture about the human bits of this story: What kind of person is Judy Miller? Why did the Times go out on a limb for her, and for that matter, what’s her deal with Sulzberger? And, if you’re just coming to this story, we can start with the really basic “Please, someone explain to me Miller, Sulzberger and Fitzgerald, and what they have to do with each other. Please.”

Jay Rosen, when we called him this morning, told us two things: First, for Miller to be effective she needs an editor, and she hasn’t really had one for a while. Second, Sulzberger failed to realized that in order to throw the full weight of the Times behind Miller, he needed to keep Executive Editor Bill Keller out of the decision-making. You can’t, says Jay, be a journalist and a loyalist at the same time.

We’re grasping at pieces of this story, and when all is revealed it will be vast and gorgeous. In the meantime, we’re talking to Jay, who burns for this story, and a couple of others.