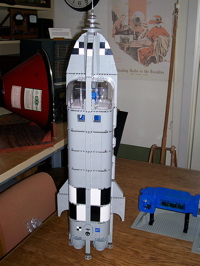 The science is incontrovertible: if we don’t act now to curb global warming, we’re in serious trouble.

And U.S. public opinion is finally catching on, helped along, most recently, by Al Gore’s new movie An Inconvenient Truth (see our hour on Al Gore Unplugged). The buzz about the movie turns on whether or not Gore’s going to run in 2008, which begs this question: could a presidential candidate now actually build a viable political platform based on global warming? If enough politicians sense the tide turning, could we imagine a kind of Sputnik moment for climate change, where political and business forces align to meet the challenge?

So, the question of the day: If the majority of Americans now understand the gravity of global warming, how could we seize this moment to do what we do best, to innovate? How could we take the lead in what may be the next “new economy” of alternative fuels? Could this be America’s chance to keep its grip on economic power and prevent China or India from closing in? What will it take to jump-start a Manhattan Project or Sputnik rocket for global warming?

Click to Listen to the Show (24 MB MP3) We take up again on Monday the church-and-state question — the Jeffersonian legacy and our Theocracy in America anxieties — with Gary...