[Thanks to Ben for nudging us to think hard about this case.] 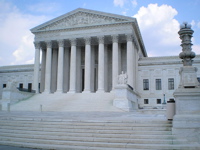 Well, sort of. Massachusetts v. EPA, which was argued last Wednesday, is the first case involving global warming to reach the Supreme Court. It centers on the EPA’s decision not to regulate CO2 emissions from automobiles (which comprise roughly 20 percent of the U.S.’s greenhouse gases). The petitioners include twelve states, three cities, and a number of NGOs; the respondents include the EPA, ten states, and a number of trade organizations.

The catch is that the legal decisions don’t involve a yea or nea about the science of global warming — that’s not what the Supreme Court does. The case, at heart, hinges on questions of administrative law. These are the three main issues:

1. Standing: Does this case fall within the Court’s jurisdiction? Does the EPA’s failure to regulate automobile CO2 harm the petitioners — and can it be rectified?

2. Authority: Does the Clean Air Act give the EPA the authority to regulate CO2 as an “air pollutant”?

3. Discretion: May the EPA choose not to regulate CO2 from automobiles? Can it reasonably claim that the CO2 is not endangering “public health or welfare”?

So why should climate watchers care about an admin law case? Because it raises the profile of global warming significantly just by reaching the pinnacle of our legal system; and because the Court’s decision will affect cases in lower courts as well as future federal legislation and regulations. SCOTUS has already voted on the case, but we won’t know the verdict until next spring. In the meantime, it suggests all sorts of interesting questions about our country’s will and ability to tackle global warming.

If you take a big step back, you might wonder why states and cities seem to be so much more concerned (and proactive) about global warming than the federal government. Is this because of politics? Because of our regulatory structures? Our legal system? What are some of the most progressive states and cities actually doing to legislate and regulate? What does the case say about a possible disconnect between the Bush administration’s stance on climate change and what citizens actually want? Does it signal momentum on the issue that’s ahead of the national political curve?

Detroit's Big Three and the EPA

Click to Listen to the Show (24 MB MP3) The U.S. Supreme Court ruled yesterday that the Environmental Protection Agency can regulate the carbon emissions that cause global warming. In doing...

Click to Listen to the Show (24 MB MP3) New Beginnings [mscaprikell / Flickr] Or so say two young environmentalists — Michael Shellenberger and Ted Nordhaus — who, a year or so...