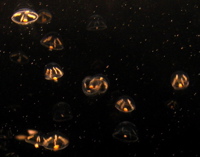 Drowning polar bears and balmy Christmases are just the tip of the (melting?) global warming iceberg — and one of the best places to watch the full systemic effects of climate change is in the oceans, which are transforming in dramatic ways:

Acidification: It turns out that the sea, through gas exchange, soaks up over 40% of our annual CO2 emissions. (Without the oceans, we’d already be living the global-warming disaster scenarios currently predicted for the second half of the century.) Dissolved CO2 creates carbonic acid (H2CO3) — think teeth dissolving in Coca Cola. More carbonic acid means fewer free carbonate ions, which are a necessary building block of the calcium carbonate (CaCO3) in shells and coral. The bigger significance of this? Coral reefs harbor some of the world’s richest biodiversity; and 25% of all marine life has some part of its life cycle associated with coral. As far as shelled organisms go, it spells potential catastrophe for everything from minuscule zooplankton to lobsters.

Hot water: Warmer water will alter habitat for many species, which will have to adapt or migrate to survive. It will also affect the stratification and upwelling of ocean water, which are critical for phytoplankton. Phytoplankton form the base of marine food chains. They live in surface water, where there’s enough light for photosynthesis, but they also need certain nutrients (iron, nitrogen, phosphate) that are inconveniently located near the ocean floor. So without upwelling, those nutrients don’t reach the surface, and phytoplankton die off. As it happens, warmer surface water can make upwelling much more difficult.

Winds: Climate change will alter weather and winds. And winds in turn affect ocean currents and upwelling. Update 31 Jan 07: There’s also the question of whether warmer ocean surface waters increase the intensity of hurricanes and typhoons.

Sea level: Island nations and low-lying coastal regions will be submerged because warmer water expands; and because melting glaciers and sea ice add more water to the tub.

Thermohaline circulation: This is the very slow global ocean current (with a fun name!) that, among other things, warms the northeast Atlantic and western Europe. There’s debate about how global warming will affect it; popular wisdom points to western Europe freezing.

Some of these disruptions are already directly observable, but many are still in the realm of complex modeling. The bottom line is that no one really knows what will happen to the oceans and the life they sustain; what’s clear is that change has already begun and that there’s no reversing it now, no matter what we do.

Professor of Marine Biology and Director of the Center for Marine Biodiversity & Conservation, Scripps Institution of Oceanography, UCSD

Elizabeth Kolbert, The Darkening Sea, The New Yorker, November 20, 2006: “Humans have, in this way, set in motion change on a geologic scale. The question that remains is how marine life will respond. Though oceanographers are just beginning to address the question, their discoveries, at this early stage, are disturbing.”

Press Release, WBGU: German Advisory Council on Global Change: “To keep the adverse effects on human society and ecosystems within manageable limits, it will be essential to adopt new coastal protection approaches, designate marine protected areas and agree on ways to deal with refugees from endangered coastal areas. All such measures, however, can only succeed if global warming and ocean acidification are combated vigorously.”

James Randerson, Tropical seas are threatened by famine as warming quickens, satellite survey shows, The Guardian, December 7, 2006: “Global warming is creating an ocean famine in swaths of tropical and sub-tropical seas, according to research using nearly a decade of satellite data.”

Past global warming suggests massive temperature shift in our future, Mongabay.com, December 7, 2006: “During the PETM, ocean acidification likely caused a mass extinction of phytoplankton by reducing the availability of carbonate ions necessary for marine organisms to build calcium carbonate shells and exoskeletons. Many scientists are concerned that history could repeat itself, especially with current studies showing a steady increase in ocean acidity.”

Kenneth R. Weiss, A Primeval Tide of Toxins, Los Angeles Times, July 30, 2006: “Organisms such as the fireweed that torments the fishermen of Moreton Bay have been around for eons. They emerged from the primordial ooze and came to dominate ancient oceans that were mostly lifeless. Over time, higher forms of life gained supremacy. Now they are under siege.”

When we burn fossil fuels — when we get in our car and we turn it on and we burn gasoline, or we flick an electrical switch and a coal-burning power plant burns a little more coal — not all of the carbon dioxide that we release stays in the atmosphere. About a third of it actually goes into the ocean. And part of the way it goes into the ocean is it gets sucked up into this polar circulation, where you have this deep water sinking at high latitudes. So we’re actually going to be making the problem of the buildup of CO2 and global warming worse if the circulation of the ocean starts to slow down. We basically don’t get the ocean acting as a trap for all of those pollutants, because it’s just not mixing and moving around as fast.

We’re already committed to a certain amount of climate change no matter what we do. We’ve emitted a lot of carbon dioxide into the atmosphere already. Most of that, on thousand-year timescales, is going to end up in the ocean. It would be very hard to stop that. Similarly with warming, even if we were to cut off all carbon dioxide emissions to the atmosphere today, there would be some continued warming, and also some continued sea level rise into the future.

And so we plugged all of the incubation data and our understanding of chemistry and our understanding of ocean circulation into some numerical simulations, ran them through a giant computer, and started to look at what the future might look like thirty years from now or fifty years from now. And what we found, at least for some of the coral species and some of the mollusk species, is that for large parts of the ocean, we could expect that those organisms would go extinct by the end of the century.

One of things we have a very interesting record of is the changes in the number of anchovettes and sardines that are caught in the Pacific Ocean. And we have a record of these catches over a long period of time, like a hundred years, and we find that the abundance of the anchovies and the sardies fluctuates on cycles of around twenty-five years, and that those are very closely related to warming and cooling events. The warming events are favorable for a sardine regime, and the cooling more for an anchovette regime. So it’s a clear historical record showing the very tight correspondence between climate, productivity, and fisheries.

The diversity of reefs is so high, it’s really hard to keep track of everything that lives with them. People estimate there are somewhere between one million and ten million species that live on coral reefs, but those estimates are crazily vague. They’re based on estimates of how many beetles there are in rainforest trees, on a partial count of things that were living in a tropical aquarium in Baltimore, so we actually don’t have a handle at all even on the basic numbers of species that live on reefs.

You can think of corals as the canaries in the environmental coal mine in terms of the health of marine ecosystems, and it is something that people who have gone to warm waters on their vacations to snorkel can relate to. And it’s not just that they’re bone-white, but actually that there’s no living coral at all, and anyone who’s been traveling to Florida or Jamaica or anywhere in the Carribean over the last thirty years has noticed this catastrophic change in these ecosystems.

We interact with the oceans a tremendous amount. A large fraction of the world’s population lives near the coast. We depend upon the ocean for fisheries, for transportation, for recreation, and it’s going to be a very different world thirty years, fifty years, a hundred years from now, from what we’re used to.