"To be human is to love gospel music."

In transition time, pre-inauguration, was there ever a clearer cue for Gospel music?  “Good news for bad times,” it’s been called. Sanctified music for a broken world. While Michele Obama’s hope is challenged, the giants of rap are owning up to their church roots: Kanye West says his Life of Pablo is a gospel album; and Chance the Rapper is singing re-birth and redemption on Coloring Book: “When the praises go up, the blessings come down.”

Out of slave spirituals like “Down at the cross where my savior died,” Gospel music keeps reinventing itself: It’s akin to the blues, but gospel is never secular, even when it’s commercial. And Gospel has a doctrine under the hand-clapping and shouts: that the least of us deserve better, that victory is coming and God can work it out.

Around the piano in my living room, we’re listening for the balm of tradition. This hour could sound like a party tape or a prayer meeting. The key players are Pastor Michael Haynes, who’s drawn multitudes to the historic Twelfth Baptist Church in the activist heart of African American Boston. Martin Luther King Jr. was Mike Haynes’s co-apprentice at Twelfth Baptist as a Boston University theology student in the early 1950s.

And then in the mid-80s, out of Shreveport, Louisiana came the prize pianist in the room today, Dennis Montgomery III. Thirty years ago when his wary parents delivered him, age 17, to the Berklee College of Music, legend is that eyes met in a Howard Johnson on the Expressway in Boston – parents looking for a church home for their son, pastor Haynes looking for a pianist. Thirty years later, Dennis Montgomery runs the gospel program at Berklee, the biggest music school in the world, and makes big waves in a mighty stream of American music.

We’re hearing from several other local gospel stars, too, including the young Kwame Nkrumah, 22 year old Berklee alum and student of Dennis’s, who plays for us a sublime version of “Over My Head.” See a video of his performance below: 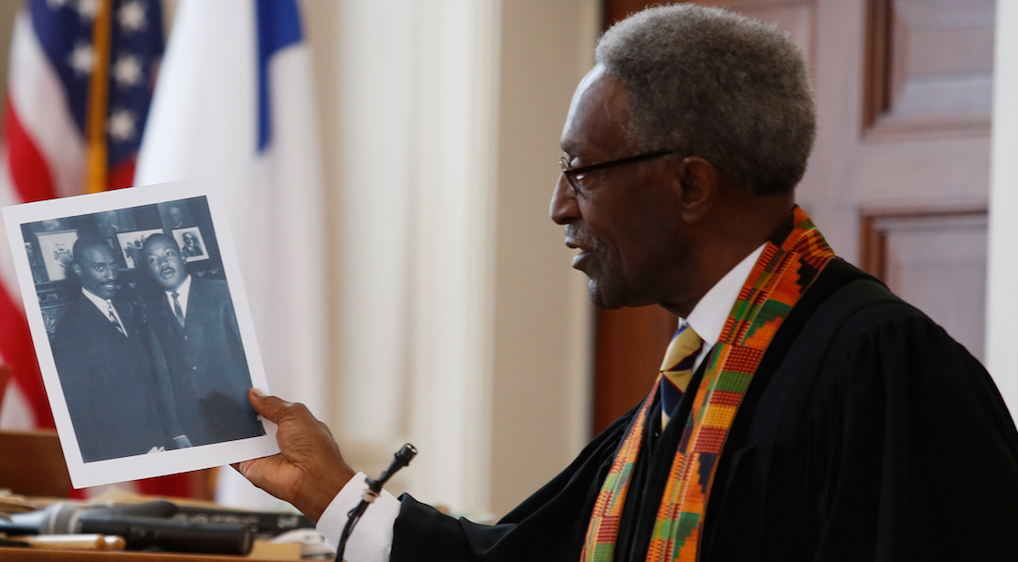 Michael Haynes, left, with his brother Roy. If Open Source had ever had a chaplain, it would have been Reverend Michael Haynes, who went to glory on Thursday this week at...